For God and Country: Celebrating the U.S. Army Chaplain Corps

Army chaplains have served in every American war since the U.S. War for Independence. Established in 1775 by the Continental Congress, each regiment was assigned a chaplain for spiritual support and in some cases, aiding the wounded. Learn more about the importance and evolution of the United States Army Chaplain Corps.

The U.S. Army Chaplain Corps is the smallest branch of the Army. Founded on July 29, 1775, representatives of the Continental Congress felt that soldiers during wartime needed spiritual support to get them through each battle. This service evolved to providing religious services, counseling and aid.

The U.S. Army Chaplain School was created to train military chaplains in preparation for World War 1. Its primary mission is to “safeguard the free exercise of religion for all Service Members and their families as well as the provision of religious support and religious accommodation.” 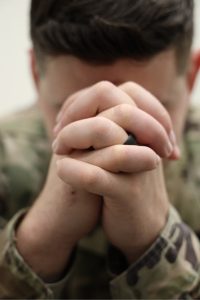 Perhaps the most famous story surrounding the actions of military chaplains is the story of the Four Chaplains. During World War 2, the Dorchester, a ship transporting U.S. troops, was torpedoed en route to Greenland. After tending to the wounded, four chaplains chose to give up their life jackets in order to save other troops as the boat sank. To celebrate this act of heroism, the Chaplain’s Medal for Heroism was created and awarded to the four service men and a commemorative stamp was issued by the U.S. Post Office in 1948.

Those who serve in this branch are fully commissioned officers and can serve in 3 roles: Active Duty Chaplaincy, Army Reserve Chaplaincy and Army National Guard Chaplaincy. More than 25,000 have served in the Chaplain Corps, representing more than 140 different religious organizations. This small branch serves an important and dynamic role for our military, which is why they continue to be celebrated 245 years later.