Home / Military Life / Wounded Warrior Project: Is it a Scam?

The Wounded Warrior Project, WWP, is a not-for-profit charity that aims to assist wounded veterans with their needs. In fact, they are one of the largest programs out there for wounded veterans. Recently, however, they have been accused of being a scam and donating an insignificant portion of their funds to their declared cause. If this is true, WWP is pretty low to run campaigns under the guise of assisting some of our nation’s bravest only to pad their own wallets with those funds. Before we accuse groups of being a scam, however, we need to do our homework. 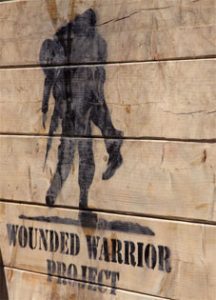 Charity Navigator, one of the leading watchdogs that keep eyes on charity groups, is a great place to look. Based on their assessment of WWP, they have an 86% score. That is not the best, but it is a far cry from being a scam. According to Charity Navigator, WWP is very transparent with their foundation and is well within the regulations set forth by the IRS. Beyond being within regulations, the percentage of Wounded Warrior Project money that is donated to their stated cause is 38% of all funds. This, again, is not the best, but it is good. On top of that, nearly 25% of their funds are used for fundraising, which generates 75 cents on the dollar. So, as you can see, they are not only giving pennies on the dollar, they are giving a fair amount. Of $234,682,943 raised in 2013, over 91 million dollars were donated to their stated cause while another 76 million dollars were kept in reserve, not used or donated, but not spent on salaries either. The CEO did pocket $375,000, which is 0.23% of all funds available. Not too bad.

Is the WWP Anti-Gun?

As for hating gun owners, the WWP has worked with hunting groups and outdoor sports organizations to provide vets with things to do and generate funds. The radio show that WWP declined to appear on was hosted by a man who had connections to a group that the Wounded Warrior Project was in a lawsuit with and subsequently won on the grounds of defamation. That doesn’t sound anti-gun; that sounds like smart business.

When it all comes down to it, it is very important to find charity groups that do what they claim to do with our money. Just as important, however, is researching accusations against such groups before accepting the word of any who would seek to discredit them. Charities such as the Wounded Warrior Project are important to our nation’s veterans and have helped more than they have profited, which is the very goal of a charitable organization. Though WWP is not the very best at giving a large percentage of its funds to those it is dedicated to helping, they do distribute a significant amount where it needs to be and are in the upper percentage of veterans-based charities.

Seth grew up in Southern Arizona before joining the U.S. Navy. While serving in the Navy, Seth was an anti-narcotics operator and an anti-submarine operator for 5 years. He was lucky enough to travel to many of the Central and South American countries, as well as visiting many South East Asian nations and islands. One of Seth’s greatest joys from his time in the Navy was teaching new Sailors firearms education and safety. After leaving the Navy in 2010, Seth returned to Arizona and had a rough time learning how to be a civilian again, often working jobs that could barely pay the bills. After going to school, Seth became an Emergency Medical Technician in the Phoenix Valley, where he now lives with his wife and son. His areas of knowledge cover military, firearms, and emergency medicine.