Established in 1775 as the Army Hospital, the Army Medical Department consists of personnel representing major medical specialties. Those who serve in this department hold clinical, research and development, teaching and field positions—deployed alongside combat units and stationed in field hospitals. To celebrate the birth of this impactful department, learn more about its history and contributions as the U.S. Army Medical Department.

The Army Hospital, or informally the “Medical Corps,” was founded by the Continental Congress on July 27, 1775. The department was formalized to provide medical care to the Continental Army as the war intensified. Those who chose to join the Corps did not hold military rank, and reported to the Director General and Chief Physician. This changed with the War of 1812, as the need to incorporate more medical services increased.

Medical staff were granted rank, with the passing of a Congressional Act in 1884. Along with cataloging the medical history of the Army and the production of the medical index “Medicus and Index Catalogue”, the founding of the Army Medical School in 1893 would lay the foundation for a strong presence within the U.S. Army. One of the school’s first major scientific contributions was a method for sterilizing water. 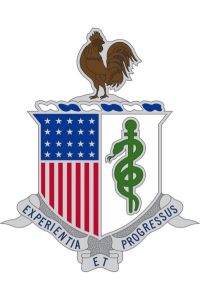 Beside developing a method for water sterilization, the Army Medical Department has made several contributions to medical science. In 1918, a team of researchers led by Major Reuben L. Kahn developed a screening test for syphilis. Blood banking and blood transfusion research has also influenced the practice globally. In 1965, a group of researchers developed Sulfamylon Cream, a medication that dramatically reduced burn mortality. Recently, the department sent its first serviceman into space as part of a Spacelab IV mission.