The Tiananmen Square Protest was a pro-democracy rally held in Beijing, China that began in mid-April 1989 and ended when the Chinese Government killed, injured, and arrested thousands of protestors on June 4 of the same year. Read on to learn more about this peaceful protest that turned into a terrible tragedy.

On April 15, 1989, Hu Yaobang, a Chinese Communist Party leader who advocated for more democracy, transparency, and freedom in the Republic of China, passed away due to a heart attack. Three days later, thousands of students started marching in his honor and protesting for his work to continue across China. These students chose the Tiananmen Square, located in the heart of China’s capital city, as their initial protest location.
Citizens of all backgrounds began to join the students that were protesting in Beijing and grew the protest to consist of over one million individuals at the Tiananmen Square and even more across other cities in China — all begging for freedom and democracy. As the protest grew, the Chinese Government determined they would take action to have this protest stopped.

On June 4, at 1:00 am, the Chinese Government sent tanks and armed troops to the Tiananmen Square, killing and crushing anyone who got in their way. Once arriving at the square, the forces then opened fire on the crowd. Most protestors tried to escape, but many chose to resist and fight. Thousands of protesters may have been killed in this massacre — however, an official death toll has never been released. Many protestors that were fortunate enough to survive the attack were arrested —some of which were later executed. 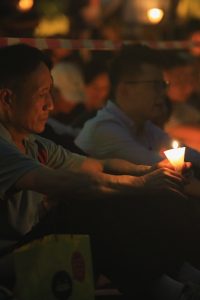 The massacre committed by the Chinese Government at the Tiananmen Square Protest was highly criticized throughout the world and led to the United States imposing sanctions against the Republic of China. The Chinese Government has banned any sort of public commemoration of the Tiananmen Square Protest, but the people of Hong Kong hold an annual vigil to commemorate the lives lost during this desperate desire for democracy and freedom.