On June 6, 1944, American, British and Canadian soldiers landed on the coast of France to begin the Battle of Normandy, a day which would famously be known as D-Day. This battle is reputable for being the largest amphibious invasion in history and one of the most important battles of World War II. Read on to discover more about D-Day and find out how it changed the world.

Since the start of World War II, Nazi Germany had been striving to overtake Europe and had already taken the northwestern portion of France. The Battle of Normandy was a mission to rid this area of German control, and it all started with D-Day. D-Day took months to plan because the risks were high, and various calculations needed to be considered – including the ocean’s tide, the weather, and even the phases of the moon.

The Germans were expecting an invasion but were unsure when or where it would occur. The Allies used this lack of knowledge to their advantage and even used acts of deception to increase their confusion. These acts included creating a “phantom” army, bogus radio conversations, and false plans that led the Germans to believe they would attack at Pas de Calais, France — the narrowest portion of the English Channel.

Despite all the planning, Eisenhower decided to delay the battle by one day due to weather conditions. It’s possible it would have been delayed further but, since paratroopers were dependent on moonlight, the conflict had to occur during a full moon. Nonetheless, the following day, the plan was executed. Eisenhower encouraged the troops, telling them, “You are about to embark upon the Great Crusade, toward which we have striven these many months. The eyes of the world are upon you. The hope and prayers of liberty-loving people everywhere march with you… I have full confidence in your courage, devotion to duty and skill in battle. We will accept nothing less than full victory!”

During the middle of the night on June 6, more than 10,000 paratroopers landed on German-occupied territory in Normandy, with the mission to secure roads and bridges. Due to the darkness and harsh weather conditions, many paratroopers were scattered and separated and sometimes even left without equipment — however, they prevailed, and the majority of their objectives were successful.

Later that same day, at 6:30 am, the amphibious attacks landed on five different beaches across Normandy — nicknamed Utah, Omaha, Gold, Juno, and Sword. Each location was led by a different corps, each with its own unique mission. 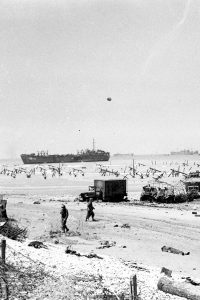 In total, more than 150,000 troops landed on Normandy’s shores and fought with resilience and bravery.

By June 11, the Allies had successfully secured all of the beaches in Normandy, and by the end of August, they had obtained the northern area of France — ending the Battle of Normandy victorious. This was a significant psychological victory and had major effects on the remainder of World War II.  At US Patriot Tactical, we are humbled by the Soldiers that stormed the beaches of Normandy on D-Day and believe their courage will forever serve as an inspiration to us all.