In April 1928, Amelia Earhart received a phone call that would propel her celebrity to national sensation – she would be the first woman to cross the Atlantic Ocean by plane. Already known for breaking conventions in her secondhand plane nicknamed “the Canary,” Earhart would soon be breaking records of global interest and inspire many generations to come. Four years later, on May 20, 1932, she would complete one of her first flights to capture the world’s attention—her solo transatlantic flight from Newfoundland to Ireland. On the anniversary of this famous flight, learn more about the life and legacy of “Lady Lindy.”

Stability wasn’t something Earhart experienced during her childhood. Her parents separated on more than one occasion and the family moved frequently, due to her father’s inability to get steady work. Those who knew her credited her upbringing to her independent nature. After graduating from Hyde Park High School in Chicago, Illinois, Earhart spent Christmas vacation with her sister in Toronto, Canada.

It was during this period, the winter of 1917, that Earhart had her first brush with aviation. The United States was still engaged in World War 1 and she found herself frequently interacting with wounded soldiers. These were formative experiences and pushed Earhart to work as a nurse’s aide at Spadina Military Hospital – in some cases tending to wounded pilots. In 1919, Earhart decided to continue her medical studies and enrolled at Columbia University. However, her time at Columbia University was brief. Her parents had decided to get back together and Earhart wanted to join them in California.

Earhart’s first experiences with flying have been well documented. While she was in Toronto, she attended the Canadian National Exhibition with a friend and witnessed a World War 1 flying exhibition. Her second experience came when she visited a Long Beach airfield after moving to California. For $10, Earhart was able to fly with the infamous Frank Hawks. By the time she reached the ground, Earhart was committed to flight. Six months and numerous odd jobs later, Earhart purchased her first plane.

It wasn’t long before Earhart was flying. Her first plane – “The Canary” – was a bright yellow Kinner Airster biplane— a plane she bought secondhand. Incredibly, it would be in this plane that Earhart achieved two major milestones. On October 22, 1922, she set a world record by flying to an altitude of 14,000 feet. Seven months later, she would become a fully licensed pilot by the FAI. However, an unfortunate financial circumstance put Earhart’s promising career on hold. Earhart would have to trade her bright yellow plane for a yellow Kissel and move her mother across the country to Massachusetts. It would a be few years before she would return to flying.

From Columnist to Celebrity

Earhart’s hiatus didn’t last too long. She joined the American Aeronautical Society, was the first to fly out of Dennison Airport and wrote newspaper columns on aviation. It was through her writing and interest in promoting female flyers that her celebrity grew.  In April 1928, Earhart was approached by publicist George P. Putnam to join Wilmer Stultz and Louis Gordon on a transatlantic flight. Earhart would become the first woman to cross the Atlantic Ocean. This trip was met with global fanfare. When the pilots returned to the United States, Earhart had earned the title “Queen of the Air” and given the nickname “Lucky Lindy” by the press. Through the continued efforts of Putnam, Earhart’s celebrity continued to increase. She even landed a position at Cosmopolitan magazine as an associate editor. 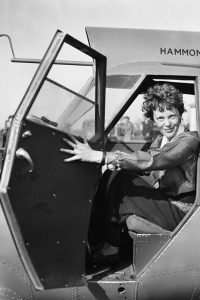 From Celebrity to Competitor

While Earhart continued to gain celebrity, she didn’t lose sight of her love for flight. She used much of her endorsement deals to fund her flying endeavors and continue to promote women in the industry. She competed in air derbies and became the first woman to cross North America solo. As she gained accolades in competition, Earhart and Putnam were secretly planning a transatlantic flight.  On May 20, 1932, Earhart made her attempt. Due to bad weather, Earhart made it as far as Ireland. Earhart’s unexpected landing gained immediate attention and become national news. Earhart was awarded a gold medal from the National Geographic Society as well as the Distinguished Flying Cross by Congress.

After a botched attempt in March of 1937, Earhart’s plan to be the first woman to fly around the world was set in motion. Earhart, along with navigator Paul Noonan, departed from Miami, Florida on June 1. After a few stops, Earhart landed in Lae, New Guinea. The duo had traveled a total of 22,000 miles, leaving 7,000 miles remaining. Earhart and Noonan left Lae on July 2. Earhart would report her altitude approximately three times before they reached their last known position, near the Nukumanu Islands. Earhart’s last radio transmission was at 8:45 a.m, reporting: “We are running north and south.” This would be the last the world heard from Amelia.

Rescue attempts were underway immediately. More than 250,000 square miles of ocean was searched—the largest rescue operation in history at the time. On July 19, the search was ended. Earhart’s crash has led to many theories on what happened. Most popular is the theory that Earhart and Noonan ran out of fuel as they neared Howland Island. A second theory is that, instead of landing on Howland Island, the crew landed on Gardner Island. While the island was searched initially, no evidence was found. What kept the theory in play was a mysterious skull found by a British colonial officer. The findings still remain inclusive. A final theory points to the Japanese. Some believe Earhart and Noonan were captured and executed by the Japanese after crashing on the island of Saipan. Witness accounts and a now-discredited series of photos kept the theory alive.

Earhart’s life included many “firsts.” And while most of her notoriety focused on her aviation accomplishments, she became a beacon of inspiration for many women. What she accomplished, she did so to show other women what they could accomplish as well.