Recently the Army released its new Modular Handgun System. The Army decided to go with an off the shelf holster for their new XM17 MHS weapon platform made by The Safariland Group. The holster is a dual locking system with a release that can be operated with the shooting thumb. Multiple mounting options will give soldiers a tailored fit. It is just the standard drop leg, MOLLE, and belt mounting options. To me it is reminiscent of the Blackhawk Serpa, it is just missing the button retention device. Which is honestly still one of my favorite holsters to date. I am not a huge fan of the thumb retention which is good for added safety. 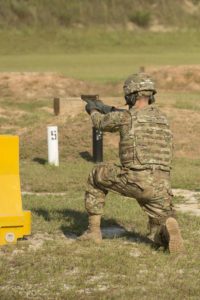 The Creation of the Modular Handgun System

The MHS is the brainchild of Sig Sauer who beat out the likes of Glock, FN America and Beretta USA for the contract to produce a handgun to replace the current m9 9mm service pistol at the tune of 580 million dollars. If you didn’t know that ended a 30-year marriage to the Beretta M9, Sig got a 10-year contract to supply XM17 full-size handgun and a compact XM18 9mm which Army officials state that the designed is to be carried in a concealed holster. A whole weapon platform for concealed purposes which will most likely only be carried by CID seems a bit unnecessary.

Word on the street is that the Army is looking into white light/laser combo which they would want a holster for as well. Doesn’t seem like a pressing matter as typically officers and MPs are the only ones who carry sidearms. It would be cool and give you something to look forward to when you have to make a range trip. But it might not be practical.

The 101st Airborne was the first unit to receive the MHS on November 28. The XM17 base features three grip sizes, Tritium night sights a standard 17 round magazine and two 21 round extended magazines. The Army says it plans to field 238,000 Sig MHS platforms. That is a lot of weapons to be issued. It may seem like a lot but when you consider the Army has an estimated 1,281,900 soldiers you realize they are not just giving the weapons to everyone. This number could go up once the XM18 is also finally issued to soldiers who would benefit from the system.

Disclaimer: The content of this article is the opinion of the writer and does not necessarily reflect the policies or opinions of US Patriot Tactical.

Angelo grew up in California before enlisting in the United States Army in the summer of 2013. After an unfortunate injury, he left the Army in December of 2014. He now spends his time running two growing businesses and is in the process of starting another. His hobbies include sports, anything automotive and firearms.