On Friday, April 14th New Jersey Gov. Chris Christie commuted the sentence of a former Marine MP convicted on a 2011 gun charge. Thankfully, Sgt. Pompey will not be spending 3 years in a New Jersey prison. Unfortunately, his career is already ruined after 6 years of court battles and lost appeals. Even worse is the fact that this never needed to happen to begin with. 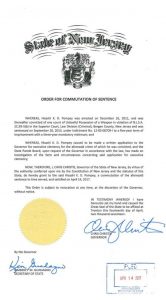 In 2011 Sgt. Hisashi Pompey had a bright future ahead of him. He was a veteran of both Iraq and Afghanistan and an Active Duty Military Police Office. Then he decided to spend his leave visiting friends.
Pompey did what almost any off duty police officer would do while traveling – he brought an off-duty handgun with him. The firearm was legally owned and registered but in Virginia, not New Jersey. Then he took it one step further by also carrying the firearm concealed when he and his friends visited a northern New Jersey nightclub.

While at the nightclub one of Pompey’s friends got involved in an altercation with other patrons. At some point, his friends also pulled Pompey’s gun from its holster and threatened the other party with it. No shots were fired, no one was hurt but pulling a gun in a crowded nightclub is a sure way to get the police involved.

When the police arrived Pompey’s friend was of course arrested. But so was Pompey on charges of carrying a concealed firearm not registered in New Jersey. You see New Jersey does not recognize out of state concealed carry permits. Plus, at the time of his arrest military law enforcement members were not protected by the Law Enforcement Officers Safety Act(LEOSA). Thankfully the LEOSA has since been amended to include additional members of the LE family including military law enforcement officers.

So, back to why this did not need to happen.

Yes, it was a grave oversight that the original LEOSA did not cover ALL law enforcement officers. It is also a kick in the pants that New Jersey does not recognize out of state carry permits. But, that was the law at the time of Pompey’s arrest and ANY police officer should have been aware of the laws when carrying a firearm off duty. Plus, it would have been much smarter to leave the firearm at home when visiting a night club.
All water under the bridge right?

Not necessarily. New Jersey, and several other states, still have laws on the books which could easily jam up an off-duty office. Sure, you are now covered by the LEOSA but have you ever read the fine print? Do you know what is and is not permitted when carrying off duty?
The LEOSA does allow off-duty officers to carry across state lines. But it is not a get out of jail free card. There are still rules you must follow.

Do yourself a favor – read the LEOSA and if you have any questions call the authorities in the state(s) you will be visiting. Better to spend some time researching upfront than doing time afterwards.