Are DREAMers falling prey to ICE?

President Trump made no secret of his desire to tighten many of the loopholes in the immigration system, something which polarized much of America. It should come as no surprise that doing so was one of his first courses of action once taking office. But a small group of outspoken opponents apparently did not take him at his word and are now facing deportation themselves.

In 2014 then-President Barack Obama granted a temporary reprieve to as many as 640,000 illegal immigrants who had been brought here as children. Often called “DREAMers”, in reference to the DREAM Act which was introduced to grant permanent legal status to these individuals, some felt they were so safe that they became the face of the illegal immigration fight. They would often appear at rallies or in interviews with journalists presenting themselves as examples of how otherwise law-abiding members of society were being potentially punished by Trump’s new policies. Turns out they are neither protected nor law-abiding. At least not all of them.

Daniel Ramirez Medina became the first “DREAMer” to be arrested by ICE as part of the post-election raids. He was first detained during what ICE officials described as an attempt to arrest a “prior deported felon”. That “prior deported felon’ turned out to be his father and during the arrest ICE official claim, Medina admitted being a gang member. Due to his “admitted gang affiliation and public safety concerns,” Medina was determined to be in violation of his current work status. It also means he is subject to deportation and deportation is just what ICE intends to do. 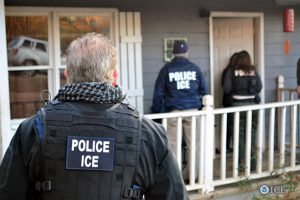 Daniela Vargas, 22, appeared at multiple rallies and was interviewed by CNN. She was portrayed as a community leader and someone looking to make the most of the opportunities America offered. The problem is she did not comply with the requirements necessary to be granted temporary amnesty. When the earlier deferment granted by President Obama expired she never filed for an extension and in late Feb. found herself in ICE custody.

Turns out she is not alone. During a recent 1 week ICE crackdown 22 other “DREAMers” we’re also arrested and each faces deportation.

Either way, there is a moral for all – if you are going to critique those enforcing the law make sure you are not yourself in violation.