If you found yourself in a self-defense situation where shots are fired, how would you treat injuries once the bullets stop flying? From the battlefield, we learned what injuries we need to be most concerned with after a firefight. During the wars in Iraq and Afghanistan, the #1 cause of preventable death was excessive bleeding from an extremity: Hemorrhaging out from a leg or an arm. What is the second leading cause of combat-related preventable death? Tension pneumothorax, which is a buildup of air between the lungs and the chest wall due to a puncture or laceration which causes the lung(s) to collapse. We will look at what can be done in the field to keep these injuries from causing death. 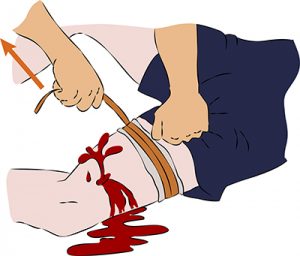 For all bleeding, we first try to stop it by applying direct pressure. This is done with a gloved hand over the injury, or even better, a big bulky dressing over the injury with significant amounts of pressure. Like, you can’t press hard enough. So long as the bandage doesn’t have to go around the face or neck, you can’t go too tight. But what if you can’t get it tight enough? It was once thought that if a bulky dressing didn’t work, you should try to elevate the wounded extremity above the heart. This does slow the bleeding some, but not much. After that fails, we were told to use pressure points. These are hard to find and make it impossible to do anything else while you hold down on the artery. It was thought that using a tourniquet should be done as a last resort, as the damage they caused was too great of a risk. However, recent studies have shown that if a bulky dressing is not enough to stop the bleeding, chances are you will need a tourniquet and that, as long as the patient gets to a hospital within a few hours, the damage from such a treatment is insignificant. So now, if the bulky dressing doesn’t work, put that tourniquet on as close to the wound as possible between the injury and the heart and crank that sucker down until the bleeding stops. Elevating the wound above the heart may mean you don’t have to crank down as hard on the tourniquet so give it a try.

So, what happens if the injury is to the chest? If you don’t see bubbles coming out of the hole with the blood, then chances are a bulky dressing will work. If there are bubbles, or the bulky dressing seemed to work but the patient is getting worse, then we have to believe there is a tension pneumothorax. This is bad. This means that we have a “sucking chest wound” that can lead to a tension pneumothorax. For those who are trained, you will insert a needle into the chest to drain the air and blood that is building up. I am not going to explain how to do this because, even for trained responders, this is a dangerous technique. What we can do, though, is stop the sucking chest wound and slow the rate at which the pneumothorax grows. To do this you will apply an occlusive dressing.

They make patches just for this that work much better than improvised methods that go by names such as “Asherman Chest Seal“ and “Bolin Chest Seal.”  If one of these is not available, however, you can still treat the injury. Take a LOT of gauze or other dry, clean cloth and wipe away as much blood and dirt as possible from the wound area. Then take enough gauze to just cover the wound and place it over the hole. You will then take a piece of plastic that is somewhat flexible and covers the entire wound area. You will tape this down on three sides with duct tape. The side that is left open is the same side the injury is on (i.e. for a wound on the left side of the chest, the left side of the seal will be left open). Once this is in place, roll the patient onto the injured side to allow blood and air to drain. The plastic will get sucked against the chest when the patient inhales and keep more air from entering through the chest wall.

Get to the Hospital ASAP

In both instances, your patient needs to get to a hospital yesterday, so don’t delay in getting help. However, these methods could buy them enough time for help to arrive and fix the actual problem.