Tattoo Regulations Across the Military

All branches of the military have their own specific codes governing the requirements of grooming. The most recent 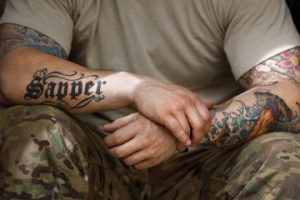 regulations endorsed by all branches of the military in regards to tattoos seem to be causing some controversy. There has been an ongoing debate as to what is appropriate for our servicemen and women and what is not. The reason may be due to the popularity of tattooing among the younger generation of enlisted soldiers. Each branch of the military has its own set of regulations, so below are some highlights of each. This isn’t an all-encompassing list of the regulations, so be sure to read them in their entirety if you have questions.

Any tattoos or body art must not contain anything obscene, racist, sexual, or ethnic, or any form of religious discrimination. If it does, it is then deemed to be unacceptable. Any tattooing that contains the above-mentioned context must be removed at the soldier’s expense. Also, you cannot use any part of your uniform to cover such tattoos. There also can be no tattoos that are associated with gangs or extremist groups. The size of a tattoo must also be considered. It cannot be more than one-fourth of the exposed body part such as the forearm or legs.

The Navy will use four criteria to determine acceptability of a tattoo. These include the content, location on the body, and the size. Also considered is whether or not the tattoo is used in reference to a medical issue. In regards to size, tattoos cannot be more than 1/4 of the circumference of the arm or leg. Their restrictions are similar to those of the Air Force in regards to the content that the tattoo projects.

The USMC appears to have the most stringent of regulations. For example, an officer cannot have a tattoo wider than 2 inches, and enlisted soldiers are allowed tattoos only as wide as 1/4 of the extremity as seen in the PT uniform. Additionally, any enlisted Marine who had grandfathered sleeve tattoos can no longer apply for Marine Corps commissioning or warrant officer programs. The Marine Corps explains that this is due to the fact that Marines generally have high profile assignments.

The Army is the only branch willing to pay for medical removal of a tattoo that doesn’t meet their standards. However, if the soldier refuses, he may be discharged. The Army allows for neck tattoos, provided that it is located at the back of the neck between the two jawbones. Again, the subject matter of a tattoo is of vital importance since it is representative of our basic traditions and values.

As you can see, most branches of the military have the same basic regulations. Recently, I spoke with an enlisted man who felt that these stringent regulations were simply a ploy by the military to streamline recruitment. There are also many other soldiers who are of the same opinion. What do you think?

Originally from Canada, Terri moved to the US at 16 and joined the Army Reserves at 17. She went active Army in 1991, and spent almost 2 years in Iraq as a program analyst for the Army Corps of Engineers. She currently works for the VA as an Accounts Management Supervisor. Terri has her MBA in HR management.