On May 1, 2011, Osama bin Laden, the founder of the terrorist group al Qaeda and a man responsible for thousands of graves, was killed by the American military. Read on to learn more about the life of this despicable man and how our military managed to take him out.

Osama bin Laden was born on March 10, 1957, in Riyadh, Saudi Arabia, to Mohammed bin Laden and Alia Ghanem. His father, Mohammed, was a wealthy individual that worked in the construction industry and had a total of 52 children — Osama being the 17th. When Osama was 18 years old, he married his cousin Najwa Ghanem and then went to King Abdulaziz University in Jiddah, Saudi Arabia.

The Beginnings and Actions of Al Qaeda

While in college, Osama grew to admire Abdullah Azzam, a pan-Islamist that advocated for Muslims to come together and formulate a united Islamic state. This later inspired him to create the terrorist organization called al Qaeda — which was mostly made up of men he met while serving in the Afghan resistance. Al Qaeda administered numerous terrorist crimes, including the attack on the U.S. Embassies in 1998 and the attack on the World Trade Center and Pentagon in 2001, earning Osama a place on the U.S. Department of State’s Most Wanted List. 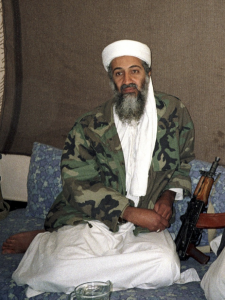 For over a decade, Osama was hiding from the consequences of his deeds done to the United States. But, in August of 2010, he was located in Abbottabad, Pakistan and, on May 1st of 2011, a group of Navy SEALs killed him by shooting him directly in the chest and head. President Barack Obama spoke about the mission, saying: “A small team of Americans carried out the operation with extraordinary courage and capability. No Americans were harmed. They took care to avoid civilian casualties. After a firefight, they killed Osama bin Laden and took custody of his body.”

At US Patriot Tactical, we remember the individuals that lost their lives from the heinous actions performed by the followers of Osama bin Laden and are thankful for the justice contrived by our military.

American U-2 Plane Shot Down

The May 4th Massacre: Shootings at Kent State