On May 4, 1970, members of the Ohio National Guard fired on a crowd of students protesting the Vietnam War at Kent State University. The event was seen as the culmination of tensions surrounding Nixon’s handling of the war. And while some argue the results did help increase anti-war sentiments, the protests resulted in the death of four students and the injury of nine others.

Learn how a student protest turned into an anti-war tragedy.

The Invasion of Cambodia

In 1968, Richard M. Nixon was elected President, owing a large part of that success to his promise of ending U.S. involvement in Vietnam. Unbeknownst to many Americans, Nixon authorized the invasion of Cambodia, a location used by North Vietnamese to station troops. It was two days after troops landed in Cambodia that Nixon finally addressed the American public. Not only were Nixon’s actions questioned by Congress, but many Americans expressed their displeasure by protesting across the country.

Clashes and the Commons

The day after the invasion, students at Kent State University took to the Commons in protest of Nixon’s actions. Tensions rose as the protest continued through the evening. Police and protestors clashed downtown, as students lit bonfires and disturbed traffic. To help curb the protest, Major Leroy Satrom declared a state of emergency and asked Ohio Governor James Rhodes for help. The police were forced to use tear gas to contain the destruction and push the protest back toward campus, ultimately dispersing the crowd for the evening.

On Saturday, May 2, after rumors that threats against the town and the university were made, Satrom asked Governor Rhodes to send the Ohio National Guard. By the time the guard finally arrived, protestors had set fire to the campus’ ROTC building and smaller fires across campus. The protest continued well into the night, with protesters clashing with both Guardsmen and firefighters.

Oddly, Sunday was calm. Approximately 1,000 Ohio National Guardsmen had been stationed across the campus. During a press conference, Governor Rhodes denounced the protest, calling it the “most vicious form of campus-oriented violence yet perpetrated by dissident groups.” 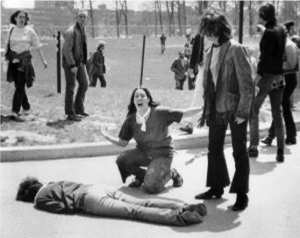 On Monday, May 4, students planned a major protest in the Commons. While university officials tried to disband the protest, more than 3,000 protesters had assembled. Both students and anti-war demonstrators began addressing the crowd, condemning the war and the presence of the National Guard.

As noon approached, orders were given for the crowd to disperse. In response, protesters began to throw rocks at the Guardsmen. As the crowd became increasingly unruly, troops were ordered to draw their rifles and advance. Tear gas was fired, and the protesters were pushed back toward Blanket Hill and on toward a practice field for the football team.

At approximately 12:24 p.m., sergeant Myron Pryor turned toward the students and began firing at the crowd. It was reported that 29 Guardsmen fired, killing four students. Photos of the dead and wounded not only created enduring images for the movement, but also amplified the anti-war voices across the country.

The shootings at Kent State created a ripple effect. Protests led to the closing of more than 450 campuses. Five days after the shooting, over 100,000 people met in Washington, D.C. to protest the war and the killings. In a report compiled by the President’s Commission on Campus Unrest, the Commission concluded that the shootings were unjustified. In a Gallup Poll, conducted days after the shooting, 58 percent of the respondents indicated that the students were to blame.

The shootings at Kent State continue to be symbolic of the division over the Vietnam War. Similarly, it made many in the movement question what exactly the protests were supposed to accomplish.