Home / Military Life / Are the Ironclad Ships Making a Comeback?

Are the Ironclad Ships Making a Comeback?

The US Navy just recently christened its newest type of ship at General Dynamics Iron Works in Bath, Maine. It is the super high tech marvel known as the Zumwalt Class Destroyer (DDG 1000). It is a class that is named after Admiral Elmo Zumwalt Jr; who is well known as being the Navy’s youngest ever commander when he took over that job post in 1970 at the tender age of 49. It is the next generation of ships to come out after the Arleigh Burke-class destroyer and is specifically designed to fill the role of surface warfare, anti-missile warfare, anti-aircraft warfare, and advanced naval gunfire support; a role that was previously provided by battleships.

This sleek piece of modern engineering is a 600-foot long radar minimizing ship. The reason that some say it is the re-emergence of the old Civil War ironclad ships is because it has very little superstructure other than its command and control deck in the center of the ship. The ship also features an almost pointed tumblehome hull that is said to provide superior wave penetrating capabilities. The ship has highly advanced radar and propulsion capabilities as well. 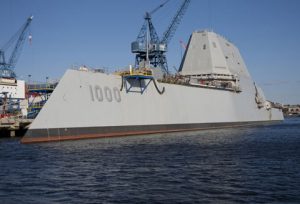 There are some impressive weapon systems built into this ship’s platform as well. It has the capability to fire some 80 Tomahawk cruise missiles and also features two 155mm long-range guns with a range of 83 miles; there are 600 rounds stored on the ship and it can automatically fire an amazing 10 rounds per minute. There are some advanced anti-aircraft and anti-torpedo weapons built into the destroyer also.

The Zumwalt class destroyers look like something that came out of the future and, if the Navy has its way, they will have weaponry from the future in the coming years too. They were designed to be able to incorporate the futuristic electromagnetic rail gun technology that is currently in the advanced stages of development; this technology is said to be capable of firing a shell over 200 miles without the use of explosives as a propellant.  The Zumwalt Class Destroyer will also be able to incorporate advanced laser weaponry when the development of that technology is finished in the coming years.

Of course, the program to develop these ships has stirred a lot of controversies. As with many modern weapon systems that are being developed, they have experienced huge cost overruns that have resulted in changes to the initial numbers of them that were planned to be developed. Originally 31 of the Zumwalt Class Destroyers were scheduled to be built, but that has been scaled down to a mere 10 vessels now. That puts the cost of each ship at around 4 billion dollars apiece. That figure jeopardizes even reducing the number of planned ships down to the one that was christened at the ironworks and two others that are currently under construction.

It will be interesting to see just how many of these technological marvels the Navy will actually produce in the upcoming few years.