Home / Military Life / Was Spinney Onto Something When it Came to Defense Spending by America?

Was Spinney Onto Something When it Came to Defense Spending by America?

There have been a lot of famous people that have been on the cover of Time Magazine over the years, but perhaps none of those was more surprising than Frank Chuck Spinney when he appeared on the cover of the magazine on March 7, 1983. He was such an obscure name that many still do not recognize his name even after he appeared on the cover, but what he had to say was significant in regards to the way the United States spends money for defense and the potential consequences of that spending in a time of war.

Who is Frank ‘Chuck’ Spinney? It should tell you something that he was born on Wright-Patterson Air Force base in 1945; the son of an Air Force Colonel. He eventually entered into military service himself in 1967 after graduating from Lehigh University with a degree in Mechanical Engineering. He left military service in 1975 and ended up working for the government in an oversight position on government military spending in 1977; that agency was called the office of ‘Program Analysis and Evaluation.’ Quite simply put, he was born connected to the military and stayed that way until his retirement.

Spinney was what is known as a whistleblower of sorts. During his time with the oversight committee, he was mentored by famous fighter pilot and government spending critic Colonel John R. Boyd. He wrote a report in 1980 entitled the “Defense Facts of Life: The Plans-Reality Mismatch.” The report went on to detail his disdain for the way government frivolously spent money on defense without regard to taking budgets seriously and that the government’s obsession with spending massive amounts of money on smaller allotments of more advanced weapons systems might come back to haunt us in a time of war. The report eventually became known as the ‘Spinney Report’ after he was summoned to testify before the Senate Budget Committee on Defense. 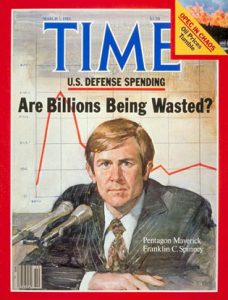 What Spinney wrote about is coming true today. Our last two major weapon systems designs that were supposed to give us military superiority well into the future have all gone extremely far over budget and had their projected number of units reduced because of it; when you can’t produce the numbers you originally were going to produce, it effectively weakens the country and our military defense capability.

Current examples of this spending include the F-35 joint services fighter and the Navy’s New Zumwalt Class Destroyer. The destroyers themselves are a technological force to be reckoned with on the seas, but they were so far over budget that the number of them being produced went from 32 to 10 and then down to 3; that is a whopping 29 fewer ships in our Navy then what was called for when they were first budgeted.

The prospects of the F-35 fighter are even scarier. It is a program that was designed to produce the majority of military fighter aircraft for all the services well into the future; as of 2014, it was 163 billion dollars over budget and nobody has even batted an eye. What makes it worse is that this is a massively high tech fighter with a huge standoff capability but a recent report said it will be no more than a worthless piece of junk in the sky if we run out of missiles and it has to rely on dogfighting capabilities to shoot down an enemy and defend our skies. If a future foe saturates the sky with aircraft then we most likely will not be able to defend against that type of attack. The famous defense master Sun Tzu, who is still studied in military schools today, warned about this very same thing in his ultra-famous book the ‘Art of War.’

I for one think we need to do a better job of sticking to defense budgets and making ones that can be kept more realistic when it comes to budgeting. We also need to take a cold hard look at why producing reliable weapons systems in greater numbers might be a better way to go than producing small numbers of grossly over budget, high technology weapons systems.