Home / Military Life / Tracks or Wheels: Which is Better for Armored Fighting Vehicles?

Tracks or Wheels: Which is Better for Armored Fighting Vehicles?

Modern armored fighting vehicles are impressively mobile but keeping them that way isn’t easy. Hauling up to 70 tons of armor and weapon systems around the landscape puts a lot of stress on the running gear, which means AFVs need a lot more maintenance than your average car. Tank crews spend significant amounts of time track bashing, and transmission or suspension faults mean that most mechanized units will finish a long road march with fewer vehicles than they started it with.

Tracked vehicles have far more reliability issues than wheeled ones, for two main reasons. Tracks themselves are complex. A few light vehicles have managed to get away with rubber tracks, but usually, they’re made up of heavy steel links joined with pins. Links break. Pins break. Tracks get caught on things and tear right off the tank, or slip their sprockets and stop working. Hard use will actually stretch the steel slightly, so the idler wheels need to be cranked forward to re-tension them. Fitting a vehicle with tracks comes at a heavy price in reliability, which is why a lot of armored vehicles have always been wheeled – and there seems to be a trend in that direction.

In fact, the first AFVs were wheeled armored cars, which started to appear in the UK in 1899. They were usually built on a standard car chassis, fitted with a lightly armored hull that could stop rifle fire, and were armed with one or two machineguns. In the First World War, they were often used in desert fighting but they turned out to be pretty useless in Europe – they quickly bogged down in the mud of the Western Front. 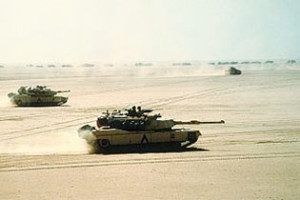 That’s where tracks came in. The first operational tank was the Mark I, which saw action in 1916. A more heavily armored box on tracks, and armed with multiple machineguns and two 6-pounder quick-firing cannons, it was designed specifically to cross the mangled landscape of the trenches. A wheeled armored car could never do that, because its wheels would sink into the mud, but a tank could grind its way across most obstacles. Not all of them, of course – my great-grandfather’s Mark V got stuck in a shell hole in early 1918, and he spent the rest of the war in a German prison camp – but most of the time tanks, even with a top speed of 6mph, were the most mobile things on a late-war battlefield.

It’s that mobility that’s kept tracks around. Tracks have a much larger ground contact surface than wheels, so for the same vehicle weight, they have lower ground pressure. That’s why the British sent Scorpion and Scimitar recce vehicles to the Falklands; the 8-ton baby tanks had lower ground pressure than an infantryman’s boot and could cross bogs a man would sink in. Tracks rarely bog down in the desert, while wheeled vehicles can easily find themselves bellied on the sand with holes under the tires. On the Eastern Front, the Wehrmacht often had to use tanks to haul other vehicles out of the mud and snow.

Tracks can give lower ground pressure for the same weight – or a manageable ground pressure at a much higher weight. That’s why all main battle tanks are still tracked. There’s no way to fit enough wheels on the side of a tank to give the same contact area as tracks would have and with weights pushing 70 tons for the latest M1A2 variants that makes tracks the only option. Fit an Abrams with eight big wheels and it would bog down on anything except hardtop.

The danger is that, with the current emphasis on peace support and urban ops, armies are moving away from tracks. Canada almost gave them up completely; when their old Leopard 1s retired, the plan was to rely on wheeled vehicles from then on. Afghanistan taught them different and they bought Leopard 2s. The newest major combat vehicle in the US Army is the wheeled Stryker – a capable vehicle, but not as mobile off road as a Bradley. Germany and the UK have both brought in tracked infantry fighting vehicles but have cut tank strength to the bone and beyond – between them they now have less than 500 operational tanks, compared with well over 4,000 at the end of the Cold War.

Wheeled vehicles are reliable and fast-moving on the road, but when the ground deteriorates they slow down in a hurry and often can’t move at all. Any successful army has to plan for the worst case, and that’s a wet, muddy battlefield where only tracked vehicles can move. The world is too full of old but functional T-72s and BMPs for us to be able to lose that capability.