Working in a Two-Tiered EMS System: Pros and Cons

Emergency Medical Services systems can vary greatly across the country, the state and even the very county you’re working in. We live in a fluid industry, and the EMS model has grown and progressed since its inception. And as our calls for service increase, creative use of resources isn’t only prudent – it’s crucial.

Many systems use a two-tier ALS model, which runs an FD station-based unit (anything from a box-type rescue to a ladder truck) and a separate ambulance from another agency to the same call. It also involves system status management of the ambulances, placing them in strategic locations around the service area based on statistical past call data. Most of the time, the ambulance belongs to a private company contracted out to provide care.

The theory is this:  The FD unit (usually) arrives first on scene, begins ALS patient care, and the ambulance arrives on scene to continue ALS patient care and provide transport to the hospital. That puts the FD unit back in service rapidly and keeps the service area covered. This is in theory; no one can ever completely predict call volume accurately but we all plan for the worst. 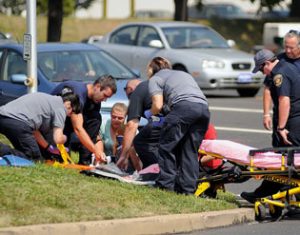 The most frequent dissention I hear thrown around is the “too many cooks in the kitchen” argument, meaning that there are too many paramedics for one patient. The deeper meaning there is that there are paramedics from two separate agencies on scene for one patient, and sometimes there’s friction. There’s the opinion that FD is supported by taxpayers, and the private ambulances are out only to make a profit, which is not the case. Most municipalities bill for hospital transport, whether they are fire-based or not.

Even though every medic is working from the same protocols and working towards the same positive patient outcome, tempers flare when all of them are trying to be in charge at once. It’s the nature of the beast. There is a separate culture with each entity, and that’s where the friction comes in. But we are all on the same team, ultimately, and conflicts between clinicians over specific treatment modalities just simply have no place on scene. No one wins, especially not the patient.

Out of that though comes the biggest pro to working in a two-tier ALS system:  lots of help and lots of help quickly. Two-tiered systems are based intrinsically on industry standards and survival rates. Think of the golden hour of trauma, or the time-is-muscle caveat of STEMIs. Quicker access to ALS care means a better chance for a good patient outcome. And if that patient is critical? You have all the hands you need, right there. Swifter interventions and rapid transport to definitive care. Shorter response times and increased availability – that’s the biggest boon.

But it means that we all have to work together, to form partnerships with our fellow clinicians no matter what agency’s patch is on their shoulder. The “us versus them” mentality needs to go by the wayside, and personalities need to tamp down a bit on scene. Remembering that we are all there for the same goal – a positive patient outcome – means we are on the same team, and that we are all important parts of the EMS model.

More Help is Better in the End

To me, the more help and the more hands the better, regardless of the agency. And the quicker we can get advanced care to a patient that needs it, and give them the best chance at surviving a critical situation, means we have succeeded.

Leah G. Dallaire is a highly accomplished freelance writer, editor and consultant with 28 years of experience. She has also concurrently been a paramedic for 20 years; the last 17 she spent serving the citizens of Pinellas County, Florida, which has a call volume of about 209,000 runs per year. She holds an M.A. and a B.A. in Writing & Literature from Union University. She has also just finished her first novel.