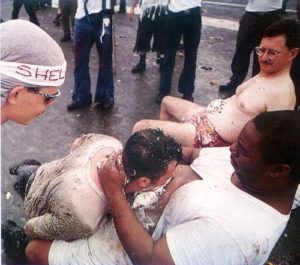 We were hazed, we were humiliated, and it took days to get the grease and oil out of our hair and off our skin (and years to get the memory of kissing of Neptune’s belly out of our minds), but by the time we were finished, we were part of a larger tradition. We had gone through the same ritual that those older chiefs, petty officers, and officers had gone through and come out as part of a brotherhood of sailors.

We had literally gone from pollywogs to shellbacks and had become part of a tradition of sailors from all over the world. For all but the most obtuse, becoming a shellback carried a sense of pride and accomplishment.

We weren’t given the option of not participating, although I am certain if a sailor had a good reason not to, the skipper would have found a way to get him out of it, but we did the crossing as a ship. Once we had completed it, we were a crew.

No one died, no one was injured and other than some recurring nightmares, no one suffered any ill effects. We forged a bond that day that carried us through West Pac, some trials and tribulations in the Persian Gulf and back home. The old guys grumbled about how this younger generation had it easy, but we were a team.

After leaving the Navy, I worked for several corporations. Most of them stressed the concept of team building exercises but had no idea how shared discomfort and humiliation could build esprit de corps and create bonds of trust that were almost unshakeable. 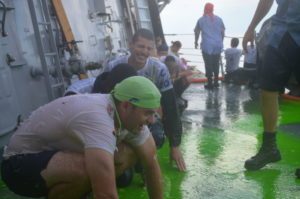 It was a different time then, of course, before camouflage uniforms at sea were a thing and females only served on non-combatant ships. The Navy has changed with the times, some of those changes have been positive while some…not so much.

There is an old truism that says, “not everything old is bad and not everything new is good.” Crossing the line is an old tradition – our version comes from the British Navy – and has been used for centuries to build camaraderie. It’s easy to relegate Crossing the Line to the dustbin of outdated traditions, but we have tossed a few too many traditions away over the last couple of decades for it to be comfortable watching another one pass on.

Matt is a former military journalist who spent 10 years in the US Navy. He served in various posts during his career, including a couple of deployments on the USS Valley Forge (CG-50). After leaving the Navy, he worked in management for a number of years before opening his own businesses. He ran those businesses until 2012 when he chose to leave the retail industry and return to writing. Matt currently works as a freelance writer, contributing to the US Patriot blog and other websites about political affairs, military activities and sailing.