Home / Reviews / What To Look For When Selecting a FN FAL

What To Look For When Selecting a FN FAL

If you’ve read my recent article on the FN FAL there’s a good chance you might be interested in picking up one of these classics, and highly effective, battle rifles. The question is – which one? There are a lot of different FALs out there and they’re not all equal.

The first big decision you have to make is between inch and metric rifles. Both use the same highly reliable action and a lot of parts are interchangeable between them, but personally, I think the inch design is inherently superior. There are two reasons for that. Firstly I’m British, and the inch FAL – usually known as the L1A1 – is a British design. More practically, it takes the original metric FAL as a very solid foundation and adds some very nice refinements.

Unlike a lot of modern rifles or any AK design, the FAL has a non-reciprocating cocking handle. It’s mounted on a slide in the upper receiver instead of on the bolt; when you pull it back a stud catches the bolt and draws it to the rear to chamber a round, but when the bolt moves back under the impulse of firing around it doesn’t catch the stud so the handle stays forward. This eliminates any risk of the moving handle catching on clothing or equipment, which usually causes a stoppage. On metric FALs, the cocking handle is fixed, but the L1A1 has a folding variant; when you cock the rifle and release the handle it slams forward, and at the end of its run it automatically folds closed, and a shoulder machined into it catches on the front of the receiver. There’s no way it can be accidentally pulled back if you catch it on an obstruction, but its shape and ribbed sides make it extremely fast and easy to use.

The inch design also has a major reliability improvement; the bolt carrier has a series of zig-zag sand clearing cuts machined into it, and there are other internal cuts with the same function. Even if the action is very dirty, it tends to blast fouling out through the large ejection port. This makes it outstandingly reliable; in the 1991 Gulf war, when the new L85A1 and various other rifles were suffering badly from the dusty environment, second-line British troops armed with the L1A1 found that it just kept blasting away as dependably as ever. 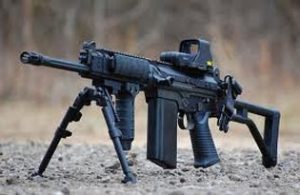 There’s one drawback with the inch design though. FN made the metric FAL in a standard fixed stock version but also as a folding-stock “Para” model – and they had some differences in the working parts. The standard rifle has a return spring in the butt, which acts on a hinged “rat tail” rod attached to the rear of the bolt carrier. The Para variant moves the return spring inside the receiver, where it’s fitted to the top cover and runs inside a lengthwise hole in the bolt carrier. There’s no Para version of the inch working parts, so you’re restricted to a fixed stock. If a folding one is important to you, the metric FAL is your only option – and it’s still a very good one. With the right adapter, it’s possible to fit a lot of M4-style collapsible stocks to a Para FAL.

So if you want a folding rifle you need a metric one; for a fixed stock the L1A1 is your best bet. Whichever you go for, the last big decision is the barrel. The standard barrel is a semi-heavy one, 21 inches long on the metric FAL and 21.7 inches on the L1A1. These make for an accurate and hard-hitting rifle, but also a very long one – the British nicknamed the L1A1 the Elephant Gun or Mechanical Musket. Unlike a .223, though, you can shorten the barrel quite a lot without losing much performance. The tiny .223/5.56mm bullet depends on velocity for its terminal effects, so lopping six inches off the barrel brings the effective range down from 300 yards to well under 200. The 7.62mm is carrying a lot more weight at lower velocity, and has a devastating effect out to far longer ranges than you can reliably achieve a hit at – fired from an FN MAG it has an effective range of over 2,700 yards. In a rifle you can lose a lot of barrel and still be able to flatten anything you can hit. The standard Para model came with a 17-inch barrel but some modern variants go a lot shorter than that. The barrel can be shortened to the front of the gas block, but a better solution is to fit a shortened gas system. DS Arms makes FAL carbines with barrels as short as 11 inches (and a slightly impractical “tactical pistol” with an 8¼-inch barrel) that are still capable of effective fire out to beyond 450 yards.

Finally, you can bring a FAL right up to date with a rail system fore-end and a heavier top cover. The standard top cover is a light metal stamping which slides into grooves in the upper receiver and, while the British welded rails to them, they did tend to wobble under the weight of night vision scopes. You can now get a variety of more solid cast or machined covers with 1913 rails that lock to the upper with screws, and these give a rock-solid platform for any optic.

The FN FAL is an old rifle and many people think it’s obsolete, but in fact, it’s the same vintage as the AK and only a decade older than the basic AR15 – and the basic action is far higher quality than either of those designs. Add a good rail system and it’s still a match for any other rifle, and better than most.