Home / Training / Shooting / What is the Purpose of Concealed Carry Permits?

What is the Purpose of Concealed Carry Permits?

The Purpose of Permits

Proponents argue that permits are necessary to ensure permits are not issued to those with a criminal or violent history, something which is needed to protect citizens as a whole. They compare CCW permits to licenses necessary for driving or operating specific businesses. In reality, they are nothing more than bureaucratic red tape which not only share little in common with these other types of licenses but also fail to provide any real protection.

First, driving or operating certain businesses requires documented training or education and a demonstrated proficiency before a license will be issued. According to the NRA’s “Guide to the Interstate Transportation of Firearms” the majority of states are “shall issue” jurisdictions, meaning after meeting specific requirements all law-abiding citizens shall be issued a permit. Very few of these states include training or proficiency tests as a requirement, but instead focus on background checks and a review of criminal history. Strike one. 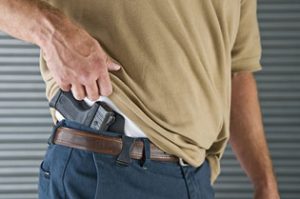 This brings us to the second “reason” for permits, precluding those who are potentially dangerous. As states earlier, the majority of states use the permitting process to conduct background investigations. The general focus of these investigations is criminal or violent backgrounds, but when was the last time you heard of a criminal attempting to obtain a legal firearm?  Short answer – they do not. Due to medical privacy laws, it is also unlikely that a history of mental defect would be detected. Strike two.

What the NRA Says

The real answer comes when you look at the other states, those which the NRA classifies as “Rights Restricted-Very Limited Issue.” The NRA describes these as states where the government is given “complete discretion over the issuance of carry permits” and warns that this discretion is “normally used to deny the issuance.” In many of these states, an applicant must prove to the state authorities a need for a concealed firearm, such as involvement in a profession which involves carrying large sums of money or valuables.  Most also have extensive training or education requirements, high fees and extensive waiting periods – all designed to discourage citizens from applying in the first place. In these states, the permit process is much more than simple red tape; it is an attempt to deny a constitutionally granted right. Strike three.

Based upon either of these scenarios, I would argue that those states which no longer require a permit are not the forward-thinking, progressive minority but those that are setting the example by realizing the government has no more business issuing a permit for a firearm than they do to write a web blog.