USMC Medals: A Look at the Purple Heart and PUC

The United States Marine Corps was founded on November 10, 1775, and although the USMC got its start with ship-to-ship fighting, they’ve changed as the years have passed. One thing, however, has remained the same: Marines have a well-deserved reputation as some of the hardest-charging members of the military. Even their nickname is tough: they gained their nickname of “leathernecks” in 1798 when the USMC first began issuing “one stock of black leather and clasp” with the sole purpose of protecting their necks during sword fighting; the upright collar on their dress uniform today is a nod to the old leatherneck tradition. The Marines are fierce warriors, and the history of their medals reflects the bravery of their service.

It wasn’t until 1782 that the first military decoration came about that applied generally to all enlisted men rather than being restricted to officers. It was, fittingly, George Washington who established the Badge of Military Merit; he got it started with the clear hope it would be the launching point for a permanent award system. There had been special medals prior to the Badge of Military Merit, but nothing for “the common soldier” to recognize special merit. The purpose of the Badge was “to foster and encourage every species of military merit.” The medal itself was cut from purple silk in the shape of a heart. After being awarded to three soldiers, the Badge of Merit went out of use, and, years later, on the 200th anniversary of George Washington’s birthday – February 22, 1932 – the Badge was born as the Purple Heart.

Of the many Marines who have earned a Purple Heart, one in particular tends to come to mind: Carlos Hathcock. Hathcock, dubbed “Long Trang” which translates as “White Feather” by the NVA (North Vietnamese Army) for the, yes, white feather he wore in the band of his bush hat, has legendary sniper status among the Marines in part for his 93 confirmed and 300 unconfirmed kills. He was such a phenomenal shot that a rifle was even named after him: an M21 variant made by Springfield Armory, the M25 White Feather. But although he was a skilled marksman – he once took out an enemy sniper from 2,500 meters away by shooting him in the eye right through his own scope – he was also a truly loyal Marine; Hathcock was quite literally willing to walk through fire for his brother Marines. 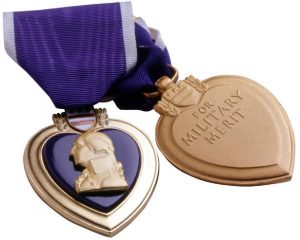 In September of 1969, Hathcock was riding in an LVT-5, a 37-ton amphibious armored vehicle, north of LZ Baldy along Route 1 when the vehicle hit an anti-tank mine. The LVT-5 was immediately engulfed in flames, but Hathcock wasn’t going to let that stop him. In repeated acts of incredible bravery, he pulled seven Marines from the burning vehicle before heading for safety himself. The injured Marines were air-lifted to the USS Repose and to a Naval Hospital in Tokyo before recovering in the burn ward at Brooke Army Medical Center in San Antonio, Texas. While he was recovering, along with the seven men he’d saved, Hathcock was awarded a Purple Heart. The selfless action that saved the lives of others became the ultimate sacrifice, though, because his injuries resulted in his career as a sniper ending entirely. He went on to teach select groups, including members of SEAL Team Six, which is now known as DEVGRU. Carlos Hathcock was the embodiment of everything a Marine should be: selfless, skilled, and dedicated.

An award that often goes unnoticed in the general public is the Presidential Unit Citation (PUC), which was originally called the Distinguished Unit Citation; it’s a ribbon that was first awarded in 1941. The PUC is awarded to USAF units “for extraordinary heroism in action against an armed enemy” and the receiving unit must display gallantry, determination, and esprit de corps in the course of executing their mission, which must take place under exceptionally hazardous conditions, and also must stand out noticeably when compared to the actions of other units taking part in the same campaign. Perhaps the most famous USMC PUC was awarded for events that took place during World War II.

The events of that day actually began several days earlier, on February 19, 1945. That’s the day when the United States first invaded Iwo Jima as part of a strategic plan to defeat Japan once and for all. Although Iwo Jima wasn’t part of the original battle plan, the Philippines had fallen more quickly than expected, and the military took advantage of the suddenly-empty days prior to the invasion of Okinawa to take on the pork-chop shaped island, which was the site of a valuable early-warning system for the Japanese. There was a series of tunnels on the island that enabled the Japanese to re-enter the various pillboxes and bunkers even after the Marines believed they’d taken them, which played a significant role in dragging out the fighting even longer than expected. The Marines suffered a high number of casualties on Iwo Jima, but, in the end, they won, and the island was the setting for the most famous photograph in Marine Corps history: the raising of the flag. 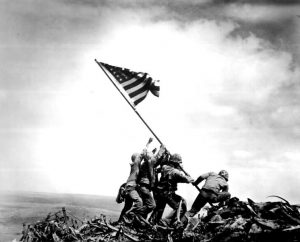 The first raising of the flag on Iwo Jima took place on February 23, 1945, atop Mount Suribachi, which was a vitally important spot from a strategic standpoint. That flag was 54”x28” and had been taken from the USS Missoula, the battalion’s transport ship. That first flag was attached to a pipe and raised by 1Lt. Harold Schrier, Sgt. Ernest Thomas, and Sgt. Henry Hansen; also present were Cpl. Charles Lindberg, Pfc. James Michels, and Pvt. Gene Marshall. Leatherneck magazine photographer SSgt. Louis Lowery snapped the first pictures of the flag after it was raised. However, it was decided the first flag was too small to be seen from the nearby beaches, among other issues, so 2nd Battalion Commander Chandler Johnson ordered the battalion’s flag be retrieved and replaced by another. Johnson famously ordered his Marines to “make it a bigger one.”

The second raising of the flag is the image most people remember from that day on Iwo Jima. That flag was definitely larger at 96”x56”. Although there are some conflicting accounts, the Coast Guard Historian’s Office recognizes the account of U.S. Coast Guardsman Quartermaster Robert Resnick, who served at Iwo Jima and came forward with the story of the bigger flag prior to his death in 2004. The order for a larger flag to be raised came down the chain of command and fell to Pfc. Rene Gagnon, a runner, who went aboard the USS Duval County on the morning of February 23, 1945, looking for a flag. Resnick said he took the flag from a bunting box and asked his commanding officer, Lt. Felix Molenda, for permission to donate it. That flag had been sewn at the Mare Island Naval Shipyard by a Mabel Sauvageau. Easy Company commander Capt. Dave Severance verified he was given the new, larger second flag by Gagnon, who had retrieved it from a ship.

It was Sgt. Michael Strank, Cpl. Harlon Block, Pfc. Franklin Sousley, and Pfc Ira Hayes, all of whom were Marines from Second Platoon, Easy Company, who took on the raising of the second flag, along with Navy Pharmacist’s Mate Second Class John Bradley and Pfc. Rene Gagnon. The Marines reached the top of Mount Suribachi around noon that day, which was approximately four hours after the first flag raising. They’d been met along the way by photographer SSgt. Louis Lowery, who turned around to accompany them to the top yet again. Already accompanying the men were photographers Joe Rosenthal, Bob Campbell, and Bill Genaust; Rosenthal was the photographer responsible for the famous image of the second flag-raising at Iwo Jima.

The Presidential Unit Citation was awarded to the V Amphibious Corps, which was composed of the 3rd, 4th, and 5th Marine Divisions, for their actions on Iwo Jima between February 19, 1945, and February 28, 1945. The 2nd Battalion Marines who were instrumental in raising the both the first and second flags at Iwo Jima, were a part of the 5th Marine Division. 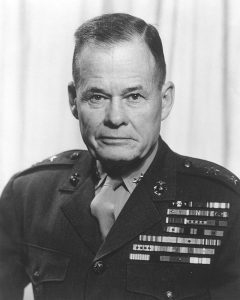 Of course, there is one Marine with a barrel-chest full of medals unparalleled by any other: Lieutenant General Lewis Burwell “Chesty” Puller. Chesty was one of only two Marines ever to be awarded 5 Navy Crosses, which is the second highest award in the U.S. military, and he had, among others, a Distinguished Service Cross, Silver Star, Bronze Star with “V” Device, Legion of Merit with Combat “V”, a Presidential Unit Citation, a Marine Corps Good Conduct Medal, and a Marine Corps Expeditionary Medal. The Marine Corps Expeditionary Medal is one of the oldest medals still being issued today by the U.S. military. It’s awarded to personnel who have engaged in at least one foreign-soil landing and fought in combat against the enemy or who participate in operations for which there simply are not any other medals. Multiple awards are acknowledged by service stars.

There are nearly 100 medals and ribbons used to honor the service and courage of United States Marines. And in the centuries since the founding of the Corps, countless Marines have proven their mettle in battle through acts of stunning sacrifice – Dakota Meyer and Kyle Carpenter, Medal of Honor recipients – and staggering bravery – Staff Sgt. Aubrey McDade Jr. and Major Brian Chontosh, Navy Cross recipients. In addition, there have been a number of celebrity Marines, including Lee Marvin, Gene Hackman, and Harvey Keitel. And then there are the untold thousands of nameless Marines whose courage will never make the nightly news or be made into a full-length feature film, but their strength and heroism will never be forgotten. There is justifiable pride in each and every ribbon pinned to the chest of a deserving Marine; in the words of Ronald Reagan, circa 1985, “Some people spend an entire lifetime wondering if they made a difference in the world. But the Marines don’t have that problem.”