The US Air Force dropped a bomb on ISIS positions in Afghanistan last week, and there was a huge explosion – in the media. The tabloids were raving about how this was the biggest bomb ever used in combat, while the left-wing “quality” press moaned about overkill and collateral damage. I just like watching stuff go boom, so I sat back and enjoyed the videos.

Mother of All Bombs

Anyway, it was a pretty big bomb. To be precise it was a GBU-43/B Massive Ordnance Air Blast, also known as the Mother of All Bombs. This 21,600-pound monster is the successor to the BLU-82 Daisy Cutter, which was designed to create instant clearings in Vietnam. Drop the 15,000-pound Daisy Cutter into the jungle and you’d end up with a clear area, covered in tiny splinters of wood, that was large enough to land a flight of Hueys or build a firebase.

Later in the Vietnam War, Daisy Cutters started to be used against logistics bases and troop concentrations. They could flatten a pretty large area, and they also had a huge psychological effect on the enemy. In the 1991 Gulf war, they were used to terrify Iraqi army units as well as to blow through minefields along the border. Later, in Afghanistan, they turned out to be very effective against the cave complexes Al-Qaida used as shelters; although the bomb wouldn’t penetrate the rock to explode inside the caves, it could collapse tunnels with the sheer force of the explosion – and, if it detonated close enough to the entrance, the blast would kill the cave’s occupants anyway.

The MOAB was designed as a larger replacement for the Daisy Cutter, which was an old and pretty clunky device. MOAB is a lot sleeker looking, but it still has to be dropped from the back of a C-130; none of the USAF’s bombers can carry it. That’s not a surprise. It weighs just short of ten tons, it contains 18,700 pounds of H-6 high explosives and it’s 30 feet and two inches long. It really is a very large bomb.
But, whatever the media are saying, it isn’t the biggest conventional bomb in the world. That honour goes to the GBU-57A/B Massive Ordnance Penetrator. This tips the scales at 30,000 pounds, of which 5,300 pounds is H-6. Most of the rest is hardened steel bomb casing because the MOP is designed to punch through yards of reinforced concrete and destroy underground bunkers. Although it’s much heavier than the MOAB the MOP is smaller; a B-2 can carry one, and a B-52 has room for a pair of them. 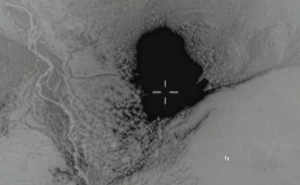 The MOAB isn’t even the largest non-nuclear bomb ever used in combat. Towards the end of WW2, the Royal Air Force was looking for a bigger version of their 12,000-pound Tallboy bomb. Like the MOP this was a penetrator, able to smash through 16 feet of rebarred concrete or more than 100 feet of soil. They’d go through other things, too; in November 1944 three of them hit the German battleship, Tirpitz, sliced through her heavy armoured decks and blew her bottom out.

Incredibly, the Tallboy wasn’t big enough for the RAF, so they went back to its designer, Barnes Wallis (who also developed the famous Upkeep mine, the “bouncing bomb”). The result was the Grand Slam – a 22,000-pound monster containing more than 9,000 pounds of Torpex inside a hardened steel case. The first one was dropped on a railway bridge outside Bielefeld, not far from where I live. It didn’t hit the bridge, but then it didn’t have to; the underground cavern it blasted out was so huge that the bridge simply collapsed into it.

The Grand Slam – nicknamed “Ten Ton Tess” – could punch through 20 feet of concrete or 130 feet of earth before exploding. At almost 27 feet long it was by far the largest bomb in the world at the time, and for it to fit in the RAF’s Lancaster bombers they had to cut away much of the lower fuselage. When some Grand Slams were given to the USAAF (who eventually copied it as the T-14) the only plane that could carry them was the B-29 Superfortress, and even that needed to be radically modified to accommodate the huge weapon.

Air-launched weapons have come a long way since the early 1940s. Precision guidance means that targets can be destroyed more reliably and with a fraction of the weight of ordnance. But the MOAB and MOP are basically just the Grand Slam reborn; proof that sometimes, both then and now, nothing will do the job except a really massive bomb.