On June 24, 1948, the Soviets implemented the Berlin Blockade — an act that stopped all road, railway and canal access to the city of Berlin. This article will explain the cause of this mandate, the economic effects, and the genius logistical solutions that were implemented to keep millions of people alive.

After defeating the Nazis  in World War II, the Allied powers split Germany into four different occupation zones. This included the densely populated capital city of Berlin — located 100 miles inside the area occupied by the Soviets. However, the Western Allies and Soviets soon began to disagree on how they envisioned reassembling Germany.

One of these disagreements involved the usage of the currency. The Western Allies firmly believed that a unified, stable currency in Germany was essential for a strong economy — while the Soviets disagreed. Despite the Soviet’s opposition, on June 21, the Western allies introduced a new currency – the Deutschmark – importing 2.5 million of this new form of money into Berlin. This angered the Soviets, provoking them to block all road, railway and canal access to Berlin. They also shut off the power to the Allied occupied sections of the city. 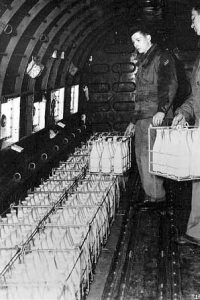 This mandate left more than 2 million citizens confined, with limited resources and no power. Fortunately, the Western Allies organized a plan to supply the area with all the necessary resources through the use of air transportation. This idea was possible due to the written agreement from 1945 that formalized a 20-mile air passage to Berlin. It also required extensive planning and many resources to pull off — resulting in  1,500 tons of food and 3,500 tons of gasoline and coal delivered every day. When this process began, it was only supplying about 90 tons of goods per day. By August of 1948, more than 1,500 planes flew to Berlin and supplied the area with over 4,500 tons of resources every day.

The Soviets eventually realized that the Western Allies could provide the city with all essential resources while they were suffering from economic issues themselves due to the counter-blockade. For this reason, the blockade was officially lifted on May 12, 1949. In total, the Berlin Airlift lasted 15 months, delivered over 2.3 million tons of goods, and is a testament to the determination, intelligence, and strength of the Western Allies.

June 28th: A Day of Great Significance for WWI