When I did my first military training as a UOTC cadet back in 1988, protective gear basically meant skin. We didn’t even have any usable waterproofs – the issue DPM rain suit was made of a PU-lined nylon fabric that was definitely waterproof, but also made a deafening swish sound as you walked. Because it wasn’t breathable, it had another problem too, especially if you were doing anything strenuous – sweat would soak you quicker than rain in anything except the worst downpour, although this was in Scotland so we did get a few of those. Helmets were out of fashion since the Falklands war six years earlier, when it was decided the Argentinian ones looked too much like ours and wearing them created a friendly fire hazard.

The issue steel helmet was hopeless anyway. It was tough enough, and with the plastic “spider” lining removed made a great washbowl, but you certainly wouldn’t want to put it on your head. The spider had to be fixed to the inside of the helmet and some genius had decided that the perfect solution was to weld in an inch-long steel spike it could clip on to. Running with the helmet on felt like a crazed woodpecker was attacking the top of your head, so the unspoken rule was not to bother wearing them unless Soviet artillery had actually opened fire.

No Protective Gear Was Used 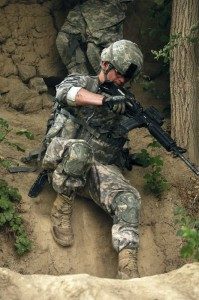 We didn’t protect any other parts of our bodies either. We did fire and maneuver training endlessly and at high speed, but throwing yourself flat on the boggy Scottish hillsides just resulted in a loud squishing sound as you started to sink into the peat. It was like diving into a wet mattress – there was no way you could hurt yourself unless hypothermia set in before ENDEX or at least a mug of hot tea warmed you up again.

Then one summer we did what the US Army calls MOUT and we called FIBUA – Fighting In Built-Up Areas. At least the Army calls it FIBUA. We called it FISH, for Fighting In Someone’s House. It was done around an old married quarter estate in Yorkshire, and it was educational.

When it was our turn to assault the “village,” we soon found that throwing yourself to the ground on a patch of stony dirt littered with broken beer bottles wasn’t quite the same as splashing into a Scottish bog. As the exercise went on, Band-Aids and hasty uniform repairs started to appear, and the skin on elbows and knees started to vanish. We learned that moving fast through a house while weighed down with 40 pounds of gear pretty much guaranteed cuts, scrapes and bruises. Personally, I learned that if you’re carrying an ancient light machine gun that ejects the spent cases out the bottom of the receiver you can get some painful burns if you dive into a heap of your own brass.

Knee and Elbow Pads: a Necessity

Soldiering – especially FISH – is still a tough, gritty business that involves a lot of minor injuries, but it’s not as bad as it used to be. Knee and elbow pads, initially picked up from the skater community but now made in proper tactical versions by companies like Blackhawk and 5.11, won’t save you from every injury but they will make life a lot more pleasant for your joints. If you’re going to be operating in an urban area, or anywhere that isn’t actually so damp all the stones have sunk into the mud, you definitely need a set of good pads.

Now that military pads are available, there’s no argument for buying a set at your local skateboard shop. Those were fine when there was no alternative but they’re not usually all that well camouflaged, and adding contrasting pads isn’t going to help your concealment. Go for a set that match your uniform.

As for the design of the pads themselves, you have three main choices. The first is conventional strap-on pads. These are the lightest, and usually the cheapest too. They’re not guaranteed to be the most comfortable but most people don’t have any problems. Then there are neoprene ones – these are a bit like a knee support, but with integrated pads on the front. Finally, if your combat trousers have knee pockets, you can get simple sheets of padding that fit into them. In general I like the strap-on pads, but the neoprene ones are looking good too and a lot of them use softer pads with a textured surface; that gives excellent grip, which can help you build a good stable fire position in a hurry.

Urban combat is a fact of life these days, so a set of good pads is pretty much essential unless regrowing skin is one of your hobbies. I’d suggest wearing a pad on both knees – some people prefer to just wear one on the knee that’s on the ground in a fire position (usually the right), but you just know that if you’re going to bang one knee it’ll be the one without the pad. They’re not exactly heavy, so why not wear two? The extra protection you gain from good pads will help you stay fit, move more boldly in action and keep your focus on situational awareness and marksmanship instead of the pain in your knees.

When it comes to protective clothing I have to say I have mixed feelings about the 21st century’s very effective, but incredibly heavy, body armor. Knee and elbow pads, though, are an unqualified success.