On June 11, 1994, the Soviet Union held a ceremony that signified they were officially leaving German soil after occupying the eastern portion for 49 years. Read on to learn how this transpired and what occurred afterward in the newly unified Germany. 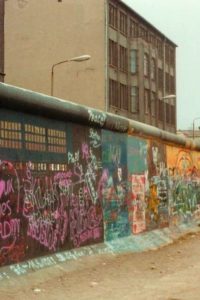 At the end of World War II, Germany was split into two countries, the Federal Republic of Germany, called West Germany, and the German Democratic Republic, called East Germany. The United States, Great Britain, and France occupied West Germany and implemented capitalism and democracy, while the Soviet Union occupied East Germany and implemented communism. These two areas that were once united quickly began to look very different. West Germany had many more jobs and opportunities, which enticed East Germans to relocate in large numbers to their western neighbor. The Soviets opposed this migration and determined it was necessary to build a barrier that would restrict movement between the two countries.

This barrier, known as the “Iron Curtain,” was initially built to restrict movement, but also stood as a symbol of the cultural and economic divide between the communist world and the free world. In 1989, due to major economic issues in the Soviet Union, it was announced that travel restrictions between the two nations would be lifted. This led to a huge celebration in what was described as “the greatest street party in the history of the world.”

Treaty on the Final Settlement with Respect to Germany

Less than a year later, on September 2, 1990, both West Germany and East Germany, France, the United States, Great Britain, and the Soviet Union signed the Treaty on the Final Settlement with Respect to Germany — allowing East and West Germany to become one. Three weeks later, on October 3, 1990, the same four Allied Nations confirmed this treaty, along with the newly merged country of Germany. This treaty also established plans for the Soviet Union to remove all their occupied troops by the year 1994 and for the United States, Great Britain, and France to remain in Germany until the Soviets departed.

The Unification of Germany

On June 11, 1994, the Soviets had an official ceremony in Wünsdorf – a Soviet military base – signifying they were officially leaving East Germany. These events diminished the Soviets’ power in eastern Europe and marked the end of the long-lasting Cold War. Germany’s unification was not an instant process, and the effects of the previous barrier can still be observed today in the two area’s economies, cultures, and people.

Adjusting to (Another) Military Move

Adjusting to (Another) Military Move

Military Discounts – Why Do We Do It?