Home / Military Life / Should the Drinking Age for Military Members Be Lowered?

Should the Drinking Age for Military Members Be Lowered?

In this day and age of a resurgent and aggressive Russia, an out of control radical Isis, and military budget moves and cuts, you don’t hear much about the little things that are making the news in the military. It is an uncertain time to be a member of the military service for sure and that is why the little things, although they don’t get the as much attention as they deserve, still matter to the soldiers, sailors and airmen that proudly serve our great country so well. That is why I support lowering the military drinking age to 18 for those who serve. 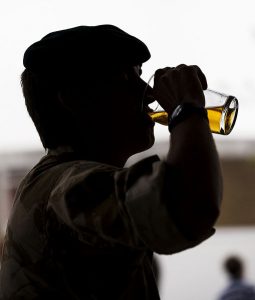 This is a subject that has been long debated and discussed but has never been close to actually taking effect. One of the problems is that the members of the Senate and Congress that have never served in the military are not always sympathetic to the needs and the problems that military members face; a lot of the legislation that is passed for the military has more to do with balanced budgets than the quality of life for armed forces members. Many legislators also fear that since being a military member is a high-stress job, it may lead to more incidents of irresponsibility and alcoholism within the ranks. I disagree with all of this and promote giving these service members who put their lives on the line daily for their country a few perks.

The truth of the matter is that most service members that are in war zones are able to get access to alcoholic beverages despite their age. During these campaigns, the military has managed to function just fine and not miss a beat.

The latest person to try and get this legislation passed for lowering the military drinking age is Senator Ron Young of Maryland. He says he is not much of a drinker himself, but he does believe in the old adage that if someone is willing to die in their country’s service, they should be allowed to have a drink if they want.

Senator Young’s proposed state law is a hybrid of sorts from what has been proposed in the past. He is not advocating that military members should have all the drinking privileges of a 21 year old citizen, but rather something that is a modification of that. He suggested the legislation only permit military members under 21 years of age to be able to consume alcoholic beverages when they are at a bar or a restaurant; there is no provision in the legislation allowing a military service member under 21 to purchase alcohol to go.

He’s On the Right Track

Why do I believe Senator Young is on the right track? If you look at the ages of the soldiers, sailors and airmen that have died in our most recent conflicts, you will see that many were under the age of 21. It’s a shame that these brave young men and women did not get to enjoy one of life’s simple pleasures before they paid the ultimate sacrifice. It is definitely time to take a look at making little privileges like this for our armed forces members a reality.