When looking to buy a new rifle or build one of your own, one of the things to look at is rifle twist rate. This is a characteristic of the barrel that will affect how your bullets perform downrange and, to some degree, will dictate what rounds should be fired out of that weapon. Rifle twist is expressed as a ratio. An example would be a 1/7 or 1:7 twist. This means that for every seven inches of barrel, there will be one complete twist or rotation of the rifling, which imparts spin onto the bullet. Without getting too in-depth about bullet types, this should explain the basics of how rifle twist influences bullet flight and what a buyer should look for to fit their own needs.

The rifling of the barrel causes a bullet to spin. This spin is directly related to how “tight” or “loose” the rifling in the barrel is. Faster spins are good for longer bullets as they need more spin to stabilize their center of gravity. Often times, shooters choose tighter twist rates for heavier bullets. This can make shooters think that it is the weight of the bullet that requires a certain twist rate. This is not (entirely) true. To make a bullet heavier, the bullet is made longer to add material without increasing caliber. It is this length that needs the twist rate.

The evolution of twist rates 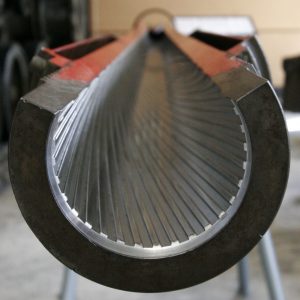 Early M16s used a 1:14 twist rate as they fired light and short bullets. This rate was very limited in what it could do; not even the 55-grain rounds used were spinning fast enough. The military then moved up to 1:12 twist that put a better spin on the bullet. As heavier rounds came out, the twist rate became tighter and tighter. The 1:9, the military found, was good still slow enough for the 55-grain rounds, but it was fast enough for 75-grain bullets as well. As barrels became shorter, however, it was noted that even tighter twist rates were needed. This was because a bullet needs at least two rotations in the barrel to become stable. A 16-inch barrel with a 1:9 twist cannot deliver this, so the twist rate was tightened to 1:8. As barrels became even shorter and bullets became heavier, twist rates were again increased. During testing, however, it was noted that bullets that twisted too fast could tear themselves apart if the copper jacket had any imperfections. For this reason, the 10.5-inch barrels on AR15s still use a 1:7, sacrificing a full two rotations in order to not over spin the round and cause it to break apart.

How to choose a twist rate

With that little history lesson, we can start to see what is needed for our rifle barrels. If you plan to use a rifle for varmint hunting loaded with 45-grain rounds, you are going to want a slow twist rate. If the purpose of the rifle is to have heavy-hitting rounds at 300 meters and will be loaded with 70-grain rounds, a twist rate of 1:7 will do better. By matching the proper twist rate to the proper rounds, you can ensure that you will fire stable rounds that will give the most accuracy your rifle has to offer.

Preparedness Gear: Everything You Need to Clean Your Weapon

How to Set up a Plate Carrier

How to Lace Military Boots

Preparedness Gear: Everything You Need to Clean Your Weapon

How to Set up a Plate Carrier

How to Lace Military Boots

M855: Facts, Falsehoods, and Fighting Back

The Military Boot – The Art of Breaking It In

Insoles – What to Look For