The Merrell MOAB tactical boots are exciting because of the many different features the boots have – in particular, the fact that there is a female-specific model, which is what I am reviewing here.

The Merrell Boot Company opened its doors in 1981, initially focusing on high-performance hiking boots. Their focus was comfort, quality, and performance, no matter the terrain or job, while avoiding the mentality that “one size fits all” with men’s and women’s footwear. The company’s boots have industry-targeted features such as lightweight materials, leather uppers, and Vibram soles which they started using in 1995. In 1989, Merrell went global and in 1997, Merrell became a subsidiary company of Wolverine World Wide.

About the Women’s Merrell MOAB 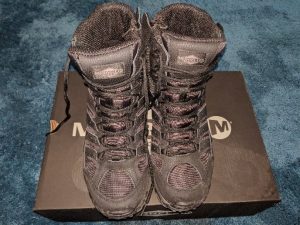 Let’s start with the outside of the boot and work our way in. The boots come in four different colors: black, coyote brown, brindle, and sage green. Please note: they coyote boot is NOT AR670-1 compliant for wear. They may be permissible for garrison wear but check with your CO before buying.

The MOAB boot has an eight-inch leather upper with a stability arm across both sides of the boot to help with ankle support – a much-appreciated feature on rough terrain. The boot also features durable mesh panels to help make it breathable.

This particular boot has laces and a YKK zipper, making the fit very customizable. Behind the zipper, there is a bellows tongue to prevent any debris or water from getting into the boot. The first three eyelets of the boots are plastic and the rest is fabric, so no worries about setting off metal detectors or having issues with reflections.

The soles are made with Vibram TC5 Plus, a nice, grippy rubber so you will have great traction on any just about terrain or surface. In addition, the toe is protected by an abrasion-resistant toe cap. This boot has the M-Select dry feature, meaning they have a moisture-wicking lining that keeps your feet both dry and cool. On the leather, a PU coating has been applied to keep water out.

On the inside of the boot, you’ll find Merrell insoles with multiple special features, my favorite of which is the “zonal arch and heel support.” Women tend to higher arches and smaller heels, so this insole was designed specifically for the female foot. There is also a heel cushion and the “Merrell air cushion” in the insole. A portion of the insole has been taken out and a layer of foam placed over the top to give it a “trampoline effect” for the heel. 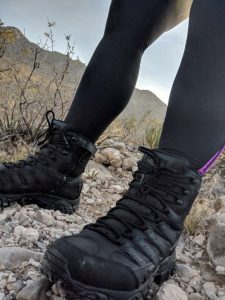 Right off the bat, the boots run true to size. The immediate comfort of the boots was surprising; they felt very similar to sneakers. They were a bit snug in the forefront (ball area) but not overly constricting. Due to the leather construction, they will likely stretch out just a bit while breaking in. However, if you try on boots and find them too constricting, go a half-size up. Hiking and tactical boots don’t relax very much.

The zipper was very handy in terms of quickly putting the boots on and taking them off, and the Bellows’ tongue didn’t add any noticeable bulk. The Merrell insoles provided an incredible amount of support as well, from the heel to the arch. I am one of those unfortunate people that have high arches and have dealt with Plantar Fasciitis before. These insoles were more than welcome. The boots not only feel safe and secure around my foot but comfortable as well. I wasn’t dreading the break-in period or have any fear of blisters.

To get the full use of these tactical boots, I took them out to a local canyon that is commonly used by Fort Bliss for rucking and occasionally used for marching by the Navy reserve station next door to Fort Bliss. The canyon consists of multiple hills and low, rocky mountains, depending on what platform one decides to trek on. There is a paved road that runs through the canyon to the top, and on each side of the road is a running path. The road portion is generally clear of gravel so there is no fear of slipping.

On my way up to the rocky side of the canyon, I ran on the smooth surfaces, testing out the feel of the boot. There was no uncomfortable rubbing, my arch felt well supported and my heel perfectly cupped, so there was no friction or discomfort at all. Considering these boots were brand new, that was extraordinary! It felt as though I slipped on a pair of wildly comfortable sneakers and took a jog around the block.

Hiking up the hills on the rocky terrain, there were quite a few patches of loose dirt and gravel, but the Vibram soles had no issues with traction. The boots are surprisingly lightweight, making it easy to get up and down the mountain without the feeling of being weighed down by them. After the hike, which lasted several hours, the Vibram soles still looked brand-new.

Because of where I am located, the monsoon season has already passed, so I had to test the waterproofing in my bathtub. Sloshing around in about 4” of water, I was pleased to find that the boots were truly waterproof. At no point did water get through the boots, and they were fully wet. 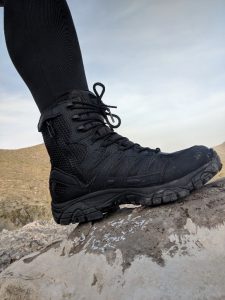 I really like these boots. Granted, they won’t be my “every day” footwear, but anytime I plan on hiking, camping, or making any kind of trek on rough terrain, the Merrell MOAB tactical boots will be my first choice. Not only do I feel secure in them due to the way they fit, but they are extremely comfortable.

Jamie Snoddy, a native of Reno, NV, spent five years onboard USS Nimitz learning operation skills, security skills, Maintenance skills, firefighting, and basic first aid. She also has experience with radars and other ships systems. At the end of her enlistment, she was assigned to the Supreme Headquarters Allied Powers Europe (SHAPE) in Belgium. While with SHAPE, Jamie worked in an international office with members from Germany, Italy, Turkey, UK, and various other countries performing statistical analyses. After three years at SHAPE, she separated from the Navy into the Active Reserves, where she continues to serve today.