Recently I got the opportunity to try out the all-new Salomon Guardian boots and let me say they are nothing short of amazing! Salomon is a name most associated with the outdoor sports world, from snow sports to hiking, climbing, and trail running, which is not surprising seeing as it was founded in the French alpine town of Annecy located near the border of Switzerland. 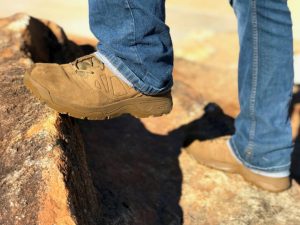 When I first looked at these boots, I thought they left a little to be desired visually, but that doesn’t really matter as they are intended to be a duty boot. A simple design is pressed into the sides to give it a little extra flair, along with the company name across the ankle, so others know what brand you’re rocking.

Breaking in the Salomon Guardian

When it comes to breaking in boots, typically I jump in the shower with them on and then try and stomp out all the excess water. This softens up the footbeds and lets your feet really sink in and mold them. This time around I went for just throwing them on and wearing them. I’m not going to lie, I was a little worried about this, but much to my surprise, it was literally like putting on a pair of running shoes. They just work. After about a week of wearing them for roughly 12 hours a day with 80% of that time being standing or walking, they feel pretty well broken in. One thing that is definitely worth noting is how well these grab onto your ankles and keep your feet in place very well. I’m used to the Nike SFBs, which leave a lot to be desired in the “ankle support” department. 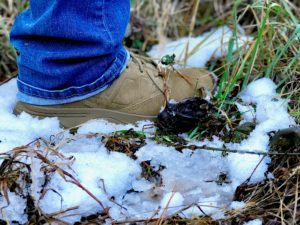 Probably the second most important thing when it comes to a good pair of boots is traction. Recently here in the Charlotte, North Carolina area, we got a GREAT dusting of that awesome white powdery stuff — I’m talking about snow. With snow comes the treacherous ice which we had a lot of. These boots looked at that ice as said piss off! Granted, nothing will hold up like studs, but every time I felt myself sliding the boots would grab and keep me upright. As far as the deep stuff goes… well it’s deep. Really not much to say there. The Nubuck leather wicks away the moisture really well by itself but I still recommend sealing it with a protector. One thing Salomon probably didn’t intend was for the boot to be so warm. After an hour walking through the snow at around 20 degrees, I could still feel my feet which was amazing. I definitely recommend these for those stationed up at Fort Drum in New York or those in Alaska.

One drawback with these Salomon Guardian boots is how thick the outsole is. To some, it isn’t really a negative, but if you’re a driver or have to operate any kind of foot pedals, it takes a bit of getting used to. You lose how a pedal feels, and I found I had to put my foot in a bit of an awkward position to drive. Not major but definitely noteworthy. Another would be how warm they are, which isn’t surprising seeing as these boots have little in the way of mesh paneling to help your foot breathe. I can get pretty sweaty, especially my feet, but if this were the middle of summer when the heat is pushing triple digits, I feel these might get a little too hot on the feet. 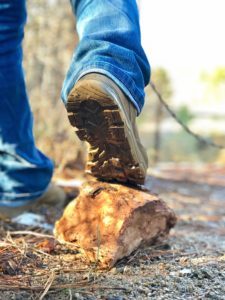 Overall these are a great pair of boots and I recommend them to anyone looking for a change of footwear. I paired mine with Fox River socks and this combo will not disappoint you.

Angelo grew up in California before enlisting in the United States Army in the summer of 2013. After an unfortunate injury, he left the Army in December of 2014. He now spends his time running two growing businesses and is in the process of starting another. His hobbies include sports, anything automotive and firearms.