The Bates Ranger II has unparalleled out of the box comfort and flexibility. Replace the insoles with ones designed for your feet, and you might have your favorite pair of desert military boots for high-speed situations and lifestyles. 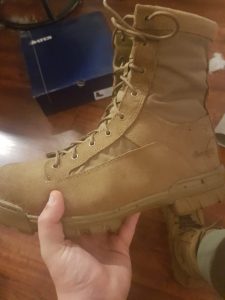 Last week I took these boots out on a few trails in the Orlando area and wore them around work and on campus. I have to admit I was skeptical at first; I’m normally a huge fan of NATO speed laces and have never owned a pair of boots with a nylon upper. Bates’ proprietary outsoles were also a new experience, most of my previous boots had the long-tested Vibram outsoles.

Despite these initial concerns, the boot held up well over the week of mud and water I threw at it and grew on me the longer I wore them. They were immediately comfortable, and I was thankful not to have to go through the week of blisters and hotspots that breaking in boots sometimes comes with. I’d recommend these boots for any activity in hot environments.

Compared to leather and mesh uppers I’ve had in the past, I was worried there was going to be little to no ankle support. It turns out most of my initial concerns wound up being moot; the leather base comes up at least to ankle height, and there are interior support straps that help to alleviate the concerns of rolling my ankle. Flexibility is where the nylon upper really shines., I was immediately able to run with the boots on without any blisters or hotspots forming and without any period of breaking the boots in. There are quite a few faster-paced ruck marches that I remember that these boots would have made better.

The rest of the boot feels very sturdy and makes for a standard military boot. The composite toe didn’t budge, and the side vents kept out water. The specs say it has electrical hazard protection, but I think I’m just going to trust Bates on that fact instead of testing that myself. One of the biggest features I missed from other boots were speed laces. Donning and tying the boots takes a little extra time and I’ve been spoiled by speed laces or zippers on all of my other pairs. Once they’re on though, they’re a fantastic boot in nearly every category.

So how did the Bates outsoles measure up? Better than I anticipated. We’ve been starting to get our daily rain here in Florida, and it was pretty wet the entire time. I tried to slip around in the boots and couldn’t. When mud and gunk started to reduce traction, I was able to kick off most of the mud that packed into the crevices. The shallow tread worries me for the longevity of the boots, some of the small notches and knobs that help provide traction are very small and give the impression that they’d wear down after a month or so on pavement. Then again, a week of wear didn’t show any signs, and it’s a factor I’d have to revisit in the future. 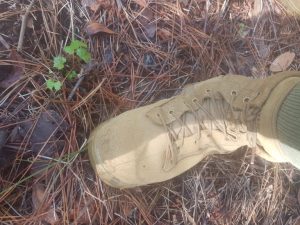 The Ranger II is possibly the most comfortable boot I’ve ever worn out of the box, and that includes civilian model hiking boots that I’ve owned over the years. I already talked about the nylon upper, but I think that’s what makes these boots so unique. It feels like I have a complete range of ankle motion while wearing them along with some protection against the ankle rolling, combining the best parts of a shoe and a boot together.

My foot felt sturdy and well-protected in the base of the boot and didn’t slide around too much while walking. As a note, I’m about as flat-footed as you can get, so I quickly replaced the Bates insole with my pediatrist-recommended ones. The standard insoles that come with most boots are rarely ever fitted for your specific feet, so make sure to replace them for optimal comfort and support.

These boots feel at home anywhere that speed matters. I didn’t get the chance to bring them in super-rugged, mountainous terrain (because Florida) but they held up well in marshy terrain and on the pavement and more compacted trails. Their strengths were really noticeable when I was jogging through some of the areas; the flexibility of the upper didn’t inhibit my normal running motion.

Heat management felt right, and these are, without a doubt, optimized warm-weather boots. Since leaving the service, I’ve ditched the green-cotton boot socks most of the time for better socks, but decided to wear a pair I had lying around for the authentic experience and still had excellent comfort and heat venting throughout the hours I wore the boots. For a desert boot, they were also surprisingly dry after taking them through mud and wet foliage and even after spraying them off a hose. The vents kept out moisture well and, even though they’re not optimized for the jungle and wet terrain, I might be bringing these on my next trip out into the Everglades. 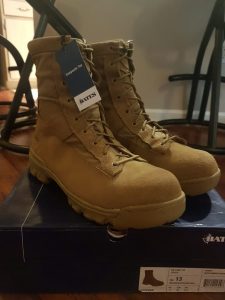 Overall, I’d give these boots a solid 4 ½ out of 5 stars for their flexibility, comfort, and sturdiness. The insoles are forgettable (and thankfully replaceable), and I don’t have enough data to see how well the boots would hold up in terrain where ankle rolling is a high possibility. However, I was able to move uninhibited through both unstable, marshy terrain and drier, compacted surfaces. Amazing value daily wear boot for both on and off-duty.

Garrett is a writer, perpetual student, and seven-year Army veteran. Currently studying Anthropology and Writing & Rhetoric at the University of Central Florida, he's hoping to stretch the G.I. Bill all the way to a PhD. Bilbo Baggins is his favorite literary character; a character that traveled, fought battles, and finally settled into a simple life. He's looking forward to squaring away that last phase.