Recent events have brought back an emotional discussion on the proper etiquette and care for the American flag. Adding to the emotion is a range of laws which seem contradictory and advice which does not make a whole lot of sense. The sensible thing, therefore, is to start back at the beginning and understand how we got to where we are today.

The Birth of the American Flag

In 1777, the Continental Congress officially approved the design of the American Flag on June 14 (aptly referred to as Flag Day). Beginning in the late 1890s, many states created Flag Desecration Statutes to protect the flag from being misused or misrepresented. Later on, in 1942, the Federal Flag Code was enacted which provided guidelines and uniformity for the respectful display and use of flags. It is important to understand that the Federal Flag Code was non-punitive in nature and therefore acted only as a guide.

In 1968 the government responded to a major flag burning incident in Central Park. Their response was the Federal Flag Desecration Law (18 U.S.C. 700 et seq.). This new law made it illegal to mutilate, deface, burn, or trample the American Flag. This law stood until 1989 when the Supreme Court ruled in Texas v. Johnson (491 U.S. 397) that it was unconstitutional for Texas to charge an individual for desecrating or mistreating the American Flag. This was the first case where the First Amendment right was discussed. During the same year Congress attempted to pass the Flag Protection Act, which was a toned down version of the Flag Desecration Law. In another court case, the United States v. Eichman (496 U.S. 310), it was determined that the Flag Protection Act was still aimed at limiting free speech and multiple arrests were overturned as a result. 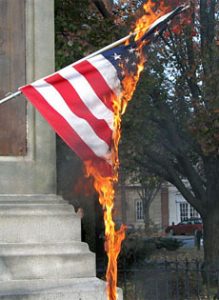 Finally in 1990, a Constitutional Amendment was attempted to allow both Congress and the States the right to “prohibit the physical desecration of the Flag of the United States.” The amendment did not receive enough votes in the House or the Senate and failed.

This brings us to today. People are filming themselves walking on the American Flag, burning the American Flag, and mistreating the symbol of this nation. As a service member, it should come as no surprise that emotion would run high at this point. This very flag adorns the coffins of our brothers and sisters in arms on their final journey home. It is an iconic symbol which is very close to our hearts. The conflict arises when we consider that in joining the military, we do make an oath to “…support and defend the Constitution of the United States….” Therefore, the law of the land is the decision of the Supreme Court.

Just Because You Can, Doesn’t Mean You Should

So what are we to do? Are we to stand idly by while people rub dirt into the stars and stripes? Remember that just because someone has the right to do something, does not mean that it is right to do it. The Freedom of Speech applies to both parties, and service members and concerned citizens should feel free to express themselves legally and morally on the topic. Help people to understand what the flag actually represents, and how their actions fail to convey their point, and only incite anger.

Remember your oath, remember your obligation, do your best to help calm the situation. Anger and violence will only end up with you in handcuffs.