Its roots can be traced back to the 1840’s, when mounted soldiers began to favor its predecessor over the standard-issue, feathered shako. In 1883, it was drab colored and sometimes worn with a campaign cord as decoration or to signify rank. It’s featured prominently in images depicting the Rough Riders storming San Juan in 1898; Theodore Roosevelt wore one. By that time, soldiers had begun creasing it in an effort to not be drenched by falling rain, then re-creasing when the standard pointed crease proved to collect water in small ponds; it became the Montana Crease and was officially adopted in 1911. Between 1942 and 1964, it was abandoned, but it came back; in 1972 a version for women was adapted from the Australian bush hat. And in 1983, it became the olive drab we know and respect today. It strikes fear into the heart of FNGs from the moment their newly-booted feet first hit the blacktop. It is the campaign hat, but it’s more than a hat; it’s a symbol of everything Drill Sergeants stand for, and this fall, we celebrate the 50th anniversary of the United States Drill Sergeant Program.

I Am a Drill Sargeant

“I am a Drill Sergeant…” 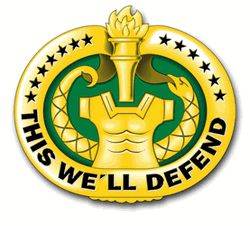 In 1962, concerns about recruit training in the Army led Assistant Secretary of the Army Stephen Ailes to carry out extensive surveys of training methods in multiple branches of the military. His findings showed there were grounds for concern. Ailes found NCOs in the Army’s training center were seen negatively by trainees. The training center was seriously understaffed, and trainers were being overworked to the breaking point. This led to many trainers having a poor attitude, which contributed to a bad relationship with trainees. But most disturbing of all was that the quality of NCOs being assigned as trainers was significantly lower than that of trainers in the other branches of the military. The Army needed to revamp its training program and raise the bar for its trainers. Two years after Ailes began his surveys, the U.S. Army’s Drill Sergeant Program was born.

“I will assist each individual in their efforts to become a highly motivated, well disciplined, physically and mentally fit soldier, capable of defeating any enemy on today’s modern battlefield…” 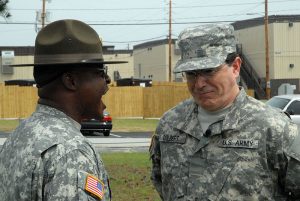 For 50 years, Drill Sergeants have been doing their jobs: some would say that job is making the lives of new recruits a living hell, but there’s more to it than that. The DS has been depicted in countless movies as a cold, heartless man who rides FNGs so hard they sometimes self-destruct (just watch the first part of Full Metal Jacket). But that isn’t reality. In fact, as a military journalist, I’ve learned one thing can be counted on when talking to service members, whether active duty or veterans: they remember their DS’s name. They know his name not because he was the cold man Hollywood enjoys stereotyping but because he pushed them to succeed, to surpass their limits, to quite literally be all they could be, and then some. They remember their DS with respect – and gratitude. DS’s play a vital role shaping new recruits into capable soldiers; without your DS, where would you be today?

“I will instill pride in all I train. Pride in self, in the Army, and in Country…”

In honor of DS’s everywhere and to celebrate the 50th anniversary of the program, there will be a series of events held in September at Fort Jackson, South Carolina, the only place the Army trains NCO’s in the ways of the Drill Sergeant. The main celebration will be held on September 12, 2014, and is an all day event. In true DS style, the event kicks off with 2-mile run first thing in the morning, starting and finishing at the U.S. Army Drill Sergeant School (USADSS). The run will include not only attendees to the celebration but also members of a number of training units from Fort Jackson and participants from a variety of local organizations. At the conclusion of the run, USADSS will host an open house concurrently with the Fort Jackson Basic Combat Training Museum. The 7,500 square foot BCT Museum showcases items pertinent to the history of combat training, including the history of the DS. The run will give you a small taste of the DS dedication to fitness – their physical training manual is 434 pages long – and a visit to the school and museum allows for a slower-paced trip down DS memory lane.

“I will insist that teach soldier meets and maintains the Army standards of military bearing and courtesy, consistent with the highest traditions of the U.S. Army…”

In the days leading up to the event, on September 8-10, 2014, there will be a DS competition. It includes a PT Test, Confidence Course, and Obstacle Course, among others, so competitors had better come ready for sweat and déjà vu. On September 11, 2014, an awards ceremony will take place, and winners will be announced. Last year’s DS of the Year was SFC David Stover and Reserve DS of the Year was SFC Ryan McCaffrey, both of whom are coordinating this anniversary event.

“I will lead by example, never requiring a soldier to attempt any task I would not do myself…”

The culmination of all these events takes place in the form of a DS Hat Social on the evening of September 12, 2014. The social will take place in the heart of the USADSS school campus in the middle of the physical training field. Uniforms are not required, but DSs are asked to wear their aforementioned campaign hats; event coordinators hope to have a large number of DS hats on the field for a one-of-a-kind photo opportunity to commemorate the anniversary event.

“But first, last, and always, I am an American Soldier. Sworn to defend the Constitution of the United States all enemies, both foreign and domestic…”

There is another aspect of the event to look forward to: in 1969, then-SFC Allen Glen Carpenter won the very first DS of the Year, and a statue in his likeness was cast and stands at the front of the USADSS today. Untold numbers of soldiers have passed by the statue and had their picture taken with it, reflecting on this original example of the fastidious perfection expected of all DS’s, and at the DS Hat Social on September 12th, the man himself will be in attendance. Retired Command Sergeant Major Allen Glen Carpenter will be the 50th anniversary event’s special guest speaker; being in his presence is not an opportunity you are likely to have again.

“I am a Drill Sergeant.”

Social event attendees are coming from as far away as California and Washington state and if you’d like to attend, visit the website: http://www.armydrillsergeants.com/events.html (while you’re there, check out the rest of the site for the brand new United States Army Drill Sergeant Association: http://www.armydrillsergeants.com/). You’ll find event information on the site as well as information about the DS Time Capsule, submissions for which are being accepted from current and former DSs. The capsule will be opened at the 75th anniversary event in 2039.

US Patriot Tactical is proud to be a sponsor and involved organization for this event and our own Paul Paterson will be in attendance; I, myself, plan to make the trip to Fort Jackson as well. It doesn’t matter who you are or when you served, you remember your Drill Sergeant with a fondness reserved for those people who leave their mark on your life in an indelible, profound way. And if you are a Drill Sergeant, there’s no way you can resist an opportunity to spend time with your colleagues and wear your hat again. Get yourself to Fort Jackson this September, and that’s an order.

“What is a drill sergeant? To officers and noncommissioned officers, he is a professional to be respected and even envied for his ability. To junior officers and non-commissioned officers, he is the man to whom they may turn for help and advice. To the first sergeant, he is the product of a way of life and a subordinate who can be depended on. To the trainee, he is a drill sergeant — the head, the man to be reckoned with, the boss. He is the instiller of discipline, the rock of courage, the guiding light, the man who never gets shaken. He is the father, the mother, the big brother, the chaplain, and many times a lot more.”