It has been less than 24 hours since the new FAA rules for drone flights have gone into effect and already there is confusion and bad information being posted online. The rules went into effect on Monday, August 29th and they only apply to the commercial use of drones. A lot of online reporting is forgetting to include that word “commercial,” and this is causing a lot of unneeded anger and turmoil. These new rules do not apply to hobbyists! Here is a quick breakdown of what they are:

For starters, the new laws only apply to commercial use of drones that weigh more than 55 pounds. For now, hobbyists are not affected. Next, commercial drones are not allowed to fly over people. This one can pose a problem for some of those who do photo work for things like weddings, events, etc. One exception is that the drone can be operated over people who are working as drone crew members.

The new rules also require that commercial drones stay in view of the operator at all times. Flying at night is no longer allowed. A big change that is actually helpful is that commercial operators do not have to have a valid pilot’s license. Now, they only need to pass a drone-oriented test before they can operate a drone.

When You Don’t Have a Pilot License 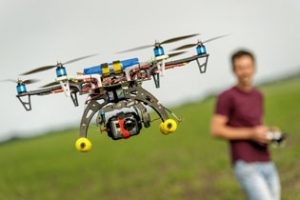 If one does not have a current pilot license, the test has to be taken in person. Those who have a current pilot’s license can take the exam online. Even though this requirement came out on Monday, but the end of the day, thousands of people had already scheduled for the exam. The exam cost about $150. There are currently around 690 testing locations in the US.

It was also reported that the FAA will offer online training courses and practice questions for novice pilots. One of the big reasons for instituting the exam is to ensure that pilots can read and follow aeronautical charts to prevent any entering of prohibited airspace.

After passing the test, drone pilots are required to fill out an FAA Airman Certificate application. If the application is approved, pilots will get a temporary license within 10 days, and they will get their permanent certificates within 120 days.

Certain waivers will be allowed and pilots should read the full law to fully understand what waivers are allowed and how to get them.

Robert Partain has been a professional writer for over 25 years. He spent ten years on active duty in the Army working as a medic and training NCO. While he covers any topic associated with military life, he specializes in writing about legislation that can affect active duty service members and veterans. Robert currently lives in the small town of Arab, Alabama.