On May 18, 1804, Napoleon Bonaparte — one of history’s most influential military leaders, became Emperor of France. In this article, we’ll provide details of Napoleon’s background, his rise to power, and his defeat.

Napoleon Bonaparte was born on August 15, 1769, on the island of Corsica. He was born into a somewhat affluent family with seven siblings — four brothers and three sisters. At the age of nine, Napoleon went to France to enroll in the Royal Military School and then, at the age of 15, he went on to Ecole Militaire in Paris. It’s here where Napoleon graduated and then became a second lieutenant in the French Army.

While Napoleon was with his family in Corsica, the people of France revolted against their political leaders in what became the French Revolution. Napoleon joined the revolution and quickly rose in military ranks — becoming a brigadier general at the age of 24 and the Commander-in-Chief of the Army of the Interior at 26.

By 1796, Napoleon was put in charge of the Army of Italy (a portion of the French Army located on the Italian border) — which was engaging in conflict with the Austrians. At the time, France was losing to the Austrians, but thanks to Napoleon’s excellent leadership skills, he turned things around and was victorious — making Napoleon very well-liked throughout France.

At this time, the Directory, the prevailing government in France, was beginning to decline. This presented an opportunity for Napoleon to create a new government, one he would name Consulate. Napoleon made himself the First Consul of this government, which gave him ultimate control over France.

Two years later, in 1804, Napoleon crowned himself emperor of France at the Cathedral of Notre Dame, and a year later was named King of Italy — in the portion of Northern Italy then owned by the French.

At its peak, the French Empire stretched from Russia to Spain. For years this aggression for land and control continued, but after a failed invasion of Russia, and many countries throughout Europe uniting against Napoleon — he was forced to surrender. He was then sent to exile on the island of Elba but escaped in less than a year and sailed back to France. 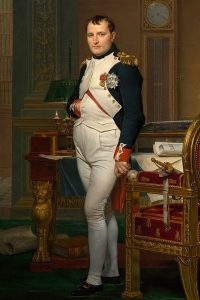 After returning to France, Napoleon began his Hundred Days campaign, where he tried to destroy the allied forces before they could destroy him. However, he was unsuccessful, and on June 18, 1815, many countries of Europe gathered at Waterloo and defeated Napoleon – sending him to exile on Saint Helena — a volcanic island off the coast of Africa.

Napoleon spent his final six years on Saint Helena until most likely dying from stomach cancer on May 5, 1821. He is now entombed at Les Invalides in Paris and remembered for the major impact he had on France, Europe, and the world.