Decades before dogs were utilized in a working capacity by the U.S. Military, they were used as mascots. In 1861, Bull Terrier Jack served with the 102nd Pennsylvania Volunteers Regiment, Washington Infantry. For 4 years, Jack gave moral support to his men, even spending 6 months as a POW. He was eventually retrieved when the Union traded a Confederate soldier for his safe return – yes, a human for a dog. And while Jack was lending his men moral support, another Bull Terrier, Sallie, was doing the same for her regiment. Sallie was presented to the captain of Company I of the Eleventh Regiment of Pennsylvania Volunteers in May of 1861 when she was 4 weeks old. A year into the war, Sallie received a doffed-hat acknowledgment from Abraham Lincoln and later survived being shot in the neck by an enemy soldier. The Minie ball couldn’t be retrieved in surgery and was instead left to work its way out, leaving behind an ugly battle scar. Both Jack and Sallie were killed by enemies after devoting their lives to the Union soldiers they literally fought to protect, and their loyalty hasn’t been forgotten. Jack’s image can be found at the Soldiers and Sailors Memorial Hall Museum at Fifth and Bigelow in Pittsburgh while Sallie’s bronze and granite monument can be seen at the Gettysburg National Military Park in south-central Pennsylvania. 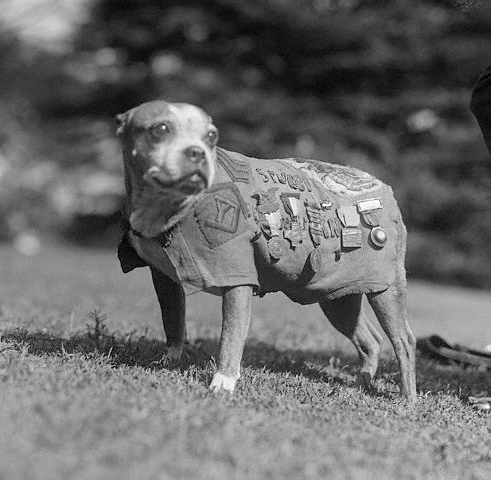 The most famous Military Working Dog of World War I was Stubby, a stray described as a Bull Terrier mix who was smuggled onto a ship departing Connecticut for France by a Pvt. Robert Conroy. The men in Stubby’s unit quickly learned to heed his warning of incoming artillery shells; his sensitive ears detected incoming fire long before they could. Stubby even achieved the rank of Sergeant, making him the highest-ranked dog ever in the U.S. Military. During his time overseas, he took down a German spy and fought alongside his men in 17 battles and 4 offensives.

It wasn’t until 1942 – World War II – when Military Working Dogs were officially used by the military. The Germans had been using Sanitatshundes – “sanitary dogs” – to locate wounded men among the dead in dangerous parts of the battlefield. The dogs ventured into no-man’s-land carrying water, alcohol and packs to comfort or save fallen soldiers. They also retrieved identifying objects from the wounded to take back to their handlers, later leading them back on rescue missions. The Americans had a lot to learn from the German’s War Dogs, and in the end it took civilians to make it happen.

In the late 1930’s, a group of prominent breeders decided to take matters into their own hands regarding military dogs. Of the many groups, “Dogs for Defense” (DFD) was the most influential. DFD was founded immediately after Pearl Harbor, and although it was initially comprised of breeders and trainers, civilians also volunteered their dogs for military use. At first, the military was skeptical of using civilian resources for their canine interests. But in July 1942, Secretary of War Harold Stimson issued a directive ordering dogs be trained for work beyond on-base sentry duty, compelling all branches of the military to take action. DFD had the political and financial backing of the American Kennel Club and large-scale breeder involvement as well as the assistance of skilled trainers, making them the obvious solution.

DFD was already supplying dogs to the Army for sentry duty, so it was a natural transition for them to fulfill War Dog needs; the Navy, Marines and Coast Guard quickly followed the Army’s lead. In order to meet the military’s needs, DFD began asking civilians to donate dogs. They couldn’t promise dogs would be returned unless they failed initial screening, but even so they quickly received 40,000 dogs. Of those, 18,000 passed screening and 10,000 went on active duty. There were, however, problems with how the program was being run. The military failed to make personnel available, so men weren’t being trained as handlers, and the dogs weren’t being trained around loud noises, which became evident on D-Day when they were terrified by booming artillery.

Eventually, procurement of dogs was transferred to the Remount Division, which was previously responsible for obtaining horses and donkeys. Although they were well-suited to the task, it was still DFD obtaining the majority of dogs in the early years. The financial strain on DFD was enormous, and in 1943, the War Dog Program was created to partially alleviate their burden. It was an incredibly popular program in its day because donations gave dogs honorary ranks such as seaman or private, while sizable donations granted them greater ranks.

By 1943, there were 8 areas of training for military working dogs (MWD’s): sentry, attack, tactical, silent scout, messenger, casualty, sledge, and pack dogs. Initially the military listed 32 breeds they felt were suitable as purebreds or crossbred with one another, including Dalmations, Standard Poodles, Briards, Boxers and Bull Mastiffs. Reality was, dogs like Dalmations tended to be too high-strung as well as standing out like beacons with their white coats, and bracheocephalic dogs like Boxers couldn’t handle extreme temperatures or excessive physical work due to their shortened nasal passages. The military soon narrowed their list even further to 7 breeds: German Shepherds, Doberman Pinschers, Collies, Belgian Sheepdogs – not to be mistaken with Malinois – Siberian Huskies, Eskimo Dogs and Malamutes. Further narrowing of the list didn’t occur until decades later.

It wasn’t until March of 1944 that the War Department made the move to officially Quartermaster War Dogs platoons. Seven War Dog platoons were deployed to Europe while 8 were sent to the Pacific. Throughout World War II, dogs worked with infantry units in combat areas, and soldiers worked to keep their dogs safe. When a dog on patrol alerted to approaching enemies, the dog and their handler were sent to the rear of the unit for protection while the threat was handled. Failure to move to the rear often resulted in death, so most teams were quick to follow protocol.

When War Dogs were an unknown quantity, there was a brief foray into mine detection training. Trial runs in North Africa led the military to believe such dogs were ineffective, so they discontinued the program altogether; only one was ever deployed, and only briefly. The reality was, trainers were using a system of electrical shocks underground to make dogs associate fear and pain with mines. Instead of making the dogs see mines as a threat they should alert to, they became nervous and frightened from constantly anticipating training jolts under their paws. Decades would pass before bomb and explosives dogs would become valuable members of the military. Today, there is even an all-Labrador team of Explosives Detection Dogs (EDD).

At least one dog received a Silver Star, a Distinguished Service Cross and a Purple Heart during World War II. The Army later revoked such commendations, saying they didn’t give recognition to animals. Soon after, in January 1944, the War Department decided to allow publication of commendations within individual units. Eventually, the Quartermaster General was granted the power to issue certificates to the donors of dogs if the dog had been unusually useful in combat. The first 8 were issued in recognition of dogs within the very first unit in the Pacific. One of those dogs is known to history buffs and even has his own Disney movie: Chips, a mixed-breed Shepherd, who was donated by Edward J. Wren of Pleasantville, NY.

During the invasion of Sicily, Chips and his handler, Pvt. John P. Rowell, were pinned down by enemy fire on a beach. Breaking free from Pvt. Rowell, Chips leapt into the pillbox where Italian gunners were ensconced, attacking them and forcing their surrender to American troops. That same day he was instrumental in the taking of 10 Italians prisoners, despite receiving a serious scalp wound and powder burns during his attack on the gunners. It was Chips whose commendations were taken away by the Army, although the men in his unit unofficially gave him a Theater Ribbon with an Arrowhead and Battlestars for each of his 8 campaigns. At the end of his service, Chips was returned home to his family in New York.

By the Korean War, the War Dogs platoons had shrunk to 6, and of those, only the 26th Infantry Scout Dog platoon remained active at Fort Riley, Kansas. Dogs not left on active duty were returned to their families. That era became a turning point for dogs in combat. The regimental commander where the 26th War Dogs were sent noticed that after using the dogs for awhile, patrols didn’t want to go out without them. As a result of the meritorious actions of the 26th War Dogs, the military decided to deploy scout dog platoons for every Division, but the war came to an end before the dogs arrived. Once again, dogs not on active duty were returned to their owners, a practice which came to a disturbing halt in the next war: Vietnam.

It was during Vietnam when dogs went from being referred to as War Dogs to being labeled Military Working Dogs (MWDs). A trial run, Top Dog 45, took place to find out whether dogs could handle the humid weather of Vietnam; it was an unmitigated success. 40 teams were assembled at Lackland Air Force Base, which has since become the military’s center for canine procurement and training. Originally, dogs were to be deployed for 120 days, but they ended up being used throughout the war although their original handlers were sent home. Vietnam saw the broadening of dogs in combat through scouting and sentry work and also water detection and tracking. Water detection was the Navy’s use of dogs to detect human presence in and under water, which provided valuable protection to ships and personnel. At first, dogs were sent to Da Nang, Tan Son Nhut, and Bien Hoa. Soldiers unused to the presence of dogs in combat quickly discovered how vital the dogs were to their survival.

On December 4, 1966, VietCong penetrated the outer defensive boundary at Tan Son Nhut AFB; at the second defensive layer, VC were spotted trying to slip past a sentry dog. In the ensuing fight, the sentry dogs suffered their first Vietnam casualties. 3 dogs and 1 handler were killed outright while another dog – German Shepherd Nemo A534 – proved the heroism of MWD’s everywhere. Nemo lost one eye and was shot in the face while his handler, Airman Robert Throneburg, was repeatedly wounded and shot until he passed out, though not before killing two VC. Before passing out, Throneburg radioed in his location, and the remaining VC were killed by other Americans. Nemo had thrown himself over his handler’s still form, protecting him from attack until medical help arrived. To this day, Nemo’s kennel and a stone statue sit at Lackland AFB as a memorial to his courage.

Another dog, Scratch, stood sentry with his handler one night and listened as his Marine gave him the briefing he himself had received earlier that night. Only minutes passed before Scratch sounded an alert, warning the men of an attack by a North Vietnamese battalion. The Marines prevailed that night, and their heads-up had come from Scratch.

Military Working Dogs have continued to provide valuable support to members of our military over the years. Today they clear explosives in the Middle East, among other talents, and there are countless tales of heroism. There is, sadly, one problem: for the most part, the military sees MWD’s as equipment, and simply leaves them behind in whatever country they last served in. Although they are no longer euthanized or “let go,” they are left in kennels, awaiting adoption – at the adopter’s expense. Organizations exist to help raise travel funds; since 2000, handlers and civilians alike have been able to adopt retired MWD’s. These courageous four-legged veterans deserve a hero’s welcome and retirement care just like our human veterans do.

Carrying Water to Hike and to Battle: A History Lesson