The earth’s magnetic field surrounds us.  The field does not harm people, animals or objects.  It is just there. So why don’t we take advantage of it with magnetometer screening?

Magnetometers measure disruptions in the earth’s magnetic field.  The technology has been around a long time. Magnetometers are essential to the functioning of cell phones, smart tablets, GPS, and other modern devices.  For whatever reason though, screening personnel with magnetometers has not caught on.

The problems with metal detectors 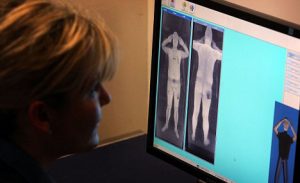 For years I dealt with metal detectors at U.S. Missions abroad.  They were cumbersome, expensive, required frequent calibration, were not very portable, and detected everything from pins, coins, earrings and other jewelry to weapons and knives. My guards required special training to operate them properly, and close supervision to ensure that they paid attention to any anomalies detected.  These machines definitely kept people from entering my facilities with weapons, but they took a lot of effort to keep the system running smoothly.  The inconvenient screening process did not win any hearts and minds of the foreign public for America either.

We want personal screening devices to detect weapons.  You don’t want them to detect your wedding ring, silver bracelet, loose change, watch or belt buckle.  Ideally, you should be able to walk up to the device, walk through, and if you don’t have a knife or weapon on you, proceed about your business.  You can do this if you use a magnetometer instead of a metal detector for screening.

For whatever reason the use of magnetometers has not caught on.  I worked for a company that marketed a very practical magnetometer for people screening.  Their system was simple, inexpensive and very practical.  The device looks exactly like a metal detector.  You walked through the upright and if you had ferrous material on you, such as a gun or knife, the sensors detected the change in the magnetic field and produced an audible warning.  The integrated video camera took a picture of you as you walked through and, through a very simple software program, placed a yellow dot on your photo indicating the exact location of the ferrous object that disrupted the magnetic field.

The advantages of magnetometer screening

Think about it for a moment.  The advantageous over a conventional metal detector are numerous:

There are other advantageous too.  Since you don’t have to calibrate magnetometers, you can literally build them into doorways.  The technology is so simple you can integrate them with just about any other sort of tech you might want: biometric readers, electronic lock/unlock devices, radiation detectors, etc.

Banks, for example, could build them into man-traps.  If you are clean, the door will unlock.  If not, it remains shut.

Magnetometers are not perfect of course.  A knife made out of solid brass, gold, or some other non-ferrous metal will not be detected.  Modern cell phones and some key fobs will set it off.

Practically speaking though, screening people in many locations using magnetometer technology makes sense.  For whatever reason it has not caught on.

Using these devices instead of metal detectors, in most circumstances, would be easier, quicker, just as effective and much less intrusive.

The company I used to work for is in the process of being bought out.  Hopefully the new owners have a sales and marketing plan to educate the public, get more of these devices out there and make all our lives easier.

Mr. Gaskill has over 20 years of extensive international experience with the Bureau of Diplomatic Security, U.S. Department of State, followed by 10+ years in the corporate sector.During his career at State, he developed and led comprehensive security programs in the Middle East, Africa, Europe and Latin America.He was Chief of Security at five U.S. Embassies:Tel Aviv, Athens, Lima, Nicosia and Lome.He has worked in more than 144 countries and has an extensive network of global contacts.His areas of professional expertise include risk assessments, physical security, access control, guard force operations and management, counter terrorism, investigations, foreign security liaison, personal protection and Emergency Plans and Preparations.

As Vice President of a Security Fusion Center, Bill has provided risk management advice and direction to major Fortune 100 defense industry, ultra high net worth and other clients.

As Global Director for Security, Alem International, Bill planned and directed all facets of the security and risk mitigation strategies for the 2004 Olympic Torch Relay that took place in over 34 countries.

Bill was commissioned as an Explosive Ordnance Disposal (EOD) Officer in the US Army immediately after college.

Mr. Gaskill has a Bachelor of Science degree in Ancient History with a math minor from the University of Wisconsin-Madison.He has a current Top Secret/SCI clearance.He has professional fluency ratings in Spanish, Greek, Hebrew and French, and has a working knowledge of Russian.