I was lucky that my first military base had a drinking age of 18. This base wasn’t located in Asia or Europe, but in the good ole US of A. In a small, rural town in southwestern Texas called Del Rio. The base was located so close to the Mexico border that leadership lowered the drinking age to prevent young Airman from crossing the border and becoming reckless in another country. Every commander has the option to lower the drinking age on base, but most don’t do it to protect their Airman.

We were able to buy beer and wine from the gas station but weren’t allowed to purchase liquor unless it was from the enlisted club. It worked out great because there was no pressure from others to drink underage. Usually, people pressure others, especially newbies, to drink as an initiation. It also took the pressure off of those over 21 to provide alcohol to those less than 21. While most can say “no” to those under 21, some don’t have that strength and want to fit in with the younger crowd.

When One Becomes Responsible for Every Action

Most people believe that once someone turns 18 they become an adult, responsible for every action. 18-year-olds are able to marry, vote, and purchase a firearm. We send young Airman overseas and expect them to pay their bills and stay out of trouble. But, we don’t trust them to drink alcohol. We expect them to either be stark sober or falling down drunk every night. Just like anything, we need to learn and be taught limits. 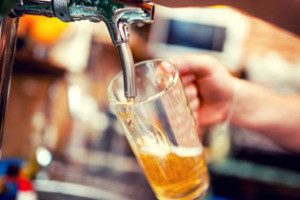 The age limit was raised to prevent drunk driving and accidents caused by drunk drivers. While the law worked, strict seatbelt requirements and D.U.I. checkpoints have also reduced the amount of injuries and deaths. Those under the required age test almost anything that has an age restriction. Kids are able to get cigarettes, guns, and drive cars before they are legally allowed to.

A Rite of Passage

Today, we expect new 21-year-olds to celebrate their birthdays with dozens of shots and gallons of beer. It’s a rite of passage to wake up the next morning regretting the night before. Binge drinking doesn’t go away after people turn 21, but there is no more pressure or need to do so. Once you know that you can legally consume alcohol, you begin to actually enjoy it and limit drinking to social events or a glass with dinner.

The thing is, people drink underage all the time. Regardless of the age limit, people are going to drink. Just like during prohibition, people still drank; they just had to do it in private. They never knew when their next drink was going to be so they drank as much as they could, just like those less than 21 today. When they do get the chance to sneak a drink, they have to do it in the biggest way possible; so they typically binge drink, which is when they get in trouble. Binge drinking leads to alcohol poisoning. If we lower the drinking age to 18, we can educate people earlier in their life about the responsible way to drink.

Emily Ruch was born in Minnesota and raised in central California before joining the Air Force at the age of 17. While serving in the Air Force, Emily worked in the Base Command Post specializing in Emergency Management. She didn’t travel the world as expected, but spent time in west Texas, Washington D.C., plus a short deployment in Southeast Asia. Instead of traveling, Emily spent most of her time on education, cultivating friendships with coworkers, and enjoying her surroundings. She was lucky enough to meet her husband of seven years while serving in Texas. Emily left the service after six years and began working as a correspondence coordinator for the Department of Energy. Now she is a stay-at-home-mom with her 10-month-old son and three dogs.