On June 28, 1914, Archduke Franz Ferdinand of Austria and his wife were assassinated by Bosnian Serb nationalists. This assassination would not only divide Austria-Hungary and Bosnia from a diplomatic perspective, it would also spark a series of events that ultimately led to World War I.

On October 6, 1908, Austria-Hungary announced the annexation of Bosnia-Herzegovina. Formally under the rule of the Ottoman Empire, both provinces were primarily Slavic. In both territories, the Slavic population had expansionist hopes. However, with the instability of the area and anti-Austrian sentiment rising, the annexation angered Serbian nationalists. To make matters worse, Russia was doing all that it could to stoke the fire.

As tensions increased, Archduke Ferdinand had plans to inspect imperial troops in Sarajevo, Bosnia’s capital city. Once his plans were exposed, a group of young Bosnians, acting as part of the revolutionary movement that later became known as Young Bosnia, plotted his assassination. Bearing some association with the Black Hand secret society, this group had already attempted to assassinate the Austrian governor of Bosnia-Herzegovina, General Marijan Varesanin. While unsuccessful, it only inspired further action among revolutionary groups.

Ex-school teacher and leader of the Black Hand, Danilo Ilic, was charged with recruiting a team to carry out the plot, creating a team of three Serbian youths. Along with the local trio, Ilic recruited three Bosnian Serbs living in Belgrade to help transport weapons into Sarajevo. Both parties wouldn’t know of each other until the night before the attacks. 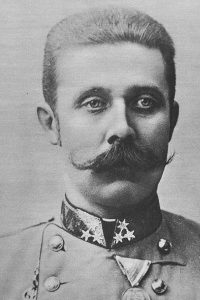 As dusk turned to dawn, a train carrying Archduke Ferdinand left Ilidza Spa for Sarajevo. It was there that Archduke Ferdinand was led by motorcade to the military barracks for inspection. He was to leave the barracks by 10:00 am, heading to the town hall. It was during this transition that Ilic planned the assassination attempt. Three of the recruits were stationed along the road taken to the town hall. Interestingly, the first two assassins did not act. However, the third assassin’s bomb ricocheted off a car and into the street. Uninjured yet shaken, the Archduke arrived at the town hall reception. After a short speech, it was decided that he and his wife would visit the civilians and soldiers injured in the bombing at a local hospital.

Gavrilo Princip, one of the recruits from Belgrade, was also stationed along Archduke Ferdinand’s planned route. After learning that the first assassination attempt failed, Princip decided to station himself along a route he believed the motorcade would take on the way back from the town hall. The Archduke’s driver wasn’t informed of this change of plan, and in an unfortunate turn of events the oversight placed the car in the path of Princip.

As the car came to a stop, Princip descended upon the car – shooting both the Duchess and Archduke Ferdinand. The Duchess was killed immediately, and Ferdinand would die later at the Governor’s house due to the injuries he sustained. Princip tried to kill himself but was apprehended after a failed attempt.

Almost immediately, Serbian Ambassadors made statements that they had warned Austria-Hungary of a retaliation. On July 28, 1914, Austria-Hungary – with the support of Germany – declared war on Serbia. Shortly after, Germany invaded France, causing Britain to declare war on Germany. Russia entered the fray, announcing its support of Serbia and continued support of France. While the assassination of Archduke Ferdinand set World War I in motion, rising nationalism and entangled alliances had caused increased tensions in Europe starting at the turn of the century.

Ultimately, the war would last four years. While it ended in November of 1918, a formal declaration of peace wasn’t signed until June 28, 1919. The Treaty of Versailles, signed five years to the day from Ferdinand’s assassination, officially ended the war between Germany and the Allied Powers. Approximately 70 delegates from 27 countries participated in the peace negotiations, which would lead to Germany and allies taking full responsibility for the war and all damages that were incurred. Critics would argue that the treaty’s aim was to destroy Germany and that it would create an overwhelmingly disastrous response from both its citizens and leaders.

Popularized by The Sound of Music, the assassination of Archduke Ferdinand was a key moment in a time. European countries were already experiencing heightened tensions, and this event would throw much of the globe into a first World War.