Hiking Boots for Use in the Military

Modern military boots are highly capable and way ahead of anything on the market even ten years ago. Advanced materials might be making the veins on every traditionalist sergeant major’s forehead pop out – it’s hard to get a shine on a pair of Nike SFBs – but for comfort and performance, they’re hard to beat. The result is boots that are lighter, tougher and more versatile than ever before.

There are times when standard military boots might not be the best option, though. Mostly they will be, but sometimes a more specialized pair could suit the conditions better and we’re long past the days of one pair of boots being used in every climate. The modern soldier or contractor has a golf bag of boots to call on depending on where they’ll be operating – desert, cold wet conditions and even urban terrain have their own unique demands, and there’s always a boot to match. Talk to troops with specialist mountain training, however, and you’ll find they often prefer traditional hiking boots. 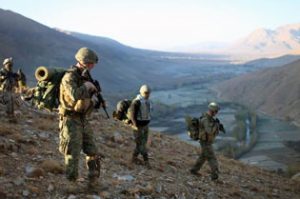 There hasn’t always been a gap between military and hiking boots; a century ago they were pretty much identical – heavy leather lace-ups, with nailed leather soles. It was only after WWII that they started to diverge, with combat boots becoming lighter and higher while hiking boots added speed lacing and padding. They also often added weight and bulk, but for comfort under a heavy load they tended to have a real advantage. When British Royal Marines crossed the Falklands in 1982, it was noticeable that most of their elite Mountain and Arctic Warfare Cadre were wearing Scarpa hiking boots; they weighed almost twice as much as the issue boot, but they were also far more waterproof and better suited to carrying 100lbs across rough terrain.

The same advantages still come in use today. Yes, 21st-century combat boots are a lot better than the abysmal ones the UK was issuing in 1982, but they still don’t give as much ankle support as a good pair of hiking boots. That can be a big deal in mountainous or very rocky terrain, where the risk of twisting an ankle is a much bigger deal than the ability to spring across flat ground. Scrambling over rocky slopes? Stiffening shanks in the soles won’t help your running speed, but they add a lot of safety when you’re scrabbling for toe-holds. Extreme cold weather is another place hiking boots often take the lead; a good winter-capable pair can take crampons, which few combat boots can do.

It actually looks like the gap between field and hiking boots is narrowing again, with many features – speed lacing and padding among them – now standard on military footwear. Sometimes it’s hard to spot the difference at all; 5.11’s Skyweight Rapid Dry boot looks military, but was designed along with hiking principles (and it’s a great general-purpose field boot). More traditional models still have a lot to offer however, and if you’re going to be working in the mountains something like the Bates Lightweight Hiker can be an excellent choice. If you have the option, don’t restrict yourself to a boot that says “tactical” on the label; choose the one that suits the ground – and you – best.