On May 12th, 1820 the founder of modern nursing practices – Florence Nightingale – was born to parents William and Frances in Florence, Italy. Despite her place of birth, Florence is of British descent – having returned to England in 1821 shortly after her birth.

Read on to learn about Florence Nightingale’s rise to prominence as a pioneer in nursing.

Born into a wealthy British family, Florence received a comprehensive education from her well-connected father, while her mother instilled a restrictive set of standards for which affluent young women of the time were expected to uphold. Despite her status as a prominent English woman, Florence was called toward humanitarianism – something seen by her family as being below someone of her class.

Despite pushback from her family, Florence went on to teach herself the science of nursing – initially hiding this fact from her family until her mid-twenties. Having learned the trade and feeling called to nursing more than ever, Florence began to travel the globe – from Rome to Egypt and into Germany. While in Germany, Florence received four months of medical training at The Institution of Kaiserswerth on the Rhine – a turning point in her life.

Having received formal training, in addition to her self-taught knowledge in nursing, Nightingale began her career at the Institute for the Care of Sick Gentlewomen in London, working as a superintendent. Quickly after accepting the position, the Crimean War exploded into action. Shortly thereafter, word reached Britain that the wounded soldiers fighting for the Alliance against Russia were in dire straits.  Nightingale volunteered to tend to the wounded – training a staff to travel with her. 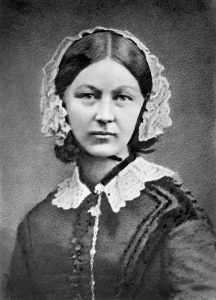 Nightingale’s team of nurses had an immediate impact on the recovery of wounded soldiers. Despite some initial setbacks due to unsanitary living conditions, Nightingale was successful in reducing the death rate by implementing standards for personal hygiene and hospital sanitation. These standards set the foundation for what has become today’s nursing guidelines. Nightingale’s success triggered a rise to prominence, as she earned great admiration from her patients who nicknamed her “the lady with the lamp” – a reference to the care she administered for soldiers deep into the nighttime hours.

Upon return to England following the war, Nightingale continued to advocate for improved sanitation standards in hospitals. She supplied so much evidence to the Royal Commission on the Health of the Army, she was given the resources necessarily to improve hospital care to her standards. In turn, Army deaths declined, and hospitals continued to improve over time.

On this International Nurses Day, also celebrated on Florence Nightingale’s birthday, we salute the brave men and women serving as a nurse for those in need.

A Closer Look at the Hindenburg Explosion

The “Forgotten Battle”: The fight for the Aleutian Islands.