Drawing Parallels Between the Gun Control Movement and Prohibition

A constant argument within the gun control debate centers on how it would be enforced. How would the government force hundreds of thousands of legal gun owners to register or even surrender their firearms?

The idea of a national firearms registration and how it would be enforced is academic. No such requirement exists, nor is there any actual Bill proposed which would create one. However, if this were to become reality, it is my belief that Americans would need to look back into history to how it would happen. Many of the answers can be found in early 20th Century American History – specifically the Prohibition Period.

Anti-Gun and the Temperance Movement

It would not be unfair to compare the temperance movement of the early 1900s to the anti-gun movement of today. Both belief their cause to be a national crisis responsible for avoidable deaths and injury and that the only answer is restricting access. Although each group consists of a small minority of the overall population, they counter this by being very vocal and developing effective lobby organizations – which results in growing support among the media and lawmakers. The only significant difference between the two is that the Tempests did not have Presidential support whereas the current administration is clearly leading the anti-gun charge. 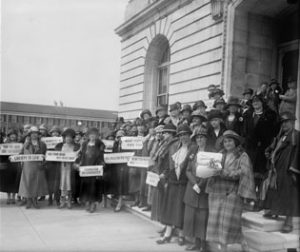 When initially faced with a lack of political support, the Temperance Movement’s answer was to circumvent the standard legislative procedure. Instead of an outright ban on alcohol, the 1917 Lever Food and Fuel Control Act prohibited the use of many grains by brewers due to “wartime conservation.” Then, on November 18, 1918, Congress passed the Wartime Prohibition Act, even though the war-ending Armistice had been signed 10 days prior.

On January 16, 1919, the 18th Amendment was ratified and became law one year later – but the tide had already started to turn. Many Americans either discounted the anti-drinking minority or thought that a little-increased regulation would be aimed at manufacturers and not impact the average citizen.  By the time Bill No. 6810, commonly referred to as The Volstead Act, was introduced, a growing number began to see lawmaker’s real intentions. The Volstead Act, which explicitly defined intoxicating beverages and potential penalties, was much more far-reaching than initially thought and was vetoed by President Wilson.

Despite what many of us have learned, either in history class or via a Hollywood education at the cinema, Prohibition was not adequately enforced nationwide. The Volstead Act established the Federal Prohibition Bureau, but the majority of enforcement relied upon cooperation by state and local law enforcement. More importantly, prosecution at a federal level was impractical if not impossible – so there would be a need for companion law at the state level. But it never happened.

Prohibition in the States

Dozens of states passed their prohibition bills, probably due in part to feeling they had no choice, but then refused to authorize funding for enforcement. New York and Maryland went a step further by never ratifying state-level prohibition at all, meaning drinking and alcohol possession may have been a federal violation but not illegal in NY or MD. This is similar to the situation faced today with the legalization of marijuana. It was this ineffective enforcement and lack of support by the states that ultimately lead to the repeal of Prohibition. This is also an approach that could be similarly effective against other types of prohibitions today. It is also exactly how the system was designed to work.