If you spend any amount of time outdoors you need to be able to cook; hot drinks and meals are vital for keeping your morale up and your body functioning, and there won’t always be a field kitchen around to deliver an endless supply of rubbery scrambled egg, greasy budget burgers and limp salad speckled with dead flies. If you’re fully tactical, part of an isolated detachment or just out hiking with some buddies, you need something you can cook on, like a field stove.

Fire’s Not Always an Option

All the best outdoor food is cooked over an open fire, but in a tactical situation that’s not an option. Recreational hikers don’t need to worry about creating smoke, but many national parks restrict or prohibit fires. Even where they’re allowed, a good portable stove is a much more efficient way of making hot drinks or preparing a quick meal. Stoves come in three basic classes based on the fuel they use – solid, liquid or gas. 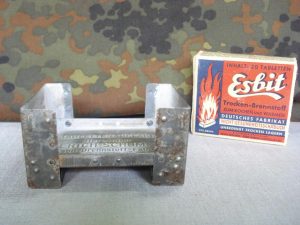 Solid fuel military stoves like the German Esbit or British hexi are the lightest and most compact; they’re just simple metal boxes that fold out to form a platform and pot stand. When it’s stowed away a box of fuel tablets fits inside; to use the stove just light a tablet, drop it on the platform and get your pot on there. These are ideal as emergency stoves, and if there are British or German troops around, the tablets are freely available, but you have no control over the heat output apart from burning more or fewer tablets; they also throw out some spectacular flames, which isn’t great if you’re trying to make a sneaky brew at night.

Gas stoves are the most popular with civilian hikers; they’re a simple, safe and powerful field stove. They don’t always work in cold weather though – butane, the most popular fuel, won’t vaporize or burn much below freezing point. The alternative is propane, which works fine pretty much anywhere between the polar circles; if you go for a gas stove make sure it uses either propane or a propane/butane mix. Also make sure it uses canisters that are widely available – the most popular is probably Camping Gaz, which conveniently are also mixed gas. Replacement canisters aren’t available through the military supply chain though, so this field stove is really only an option for short exercises or civilian backpacking.

Liquid fuel stoves include alcohol-powered ones like the popular Trangia, but again these are best for civilian activities; the fuel’s impossible to get in the field. A slightly better – and much more powerful – option is a pressure stove. The classic one is the Coleman Peak One, which runs on unleaded gas. A bottle of gasoline isn’t really something you want to have in your field gear though, because it’s pretty dangerous stuff and again you can’t get a resupply. Instead, go for a multifuel stove; Coleman has the multifuel Peak and there are some good models from MSR, Optimus and various other companies. Multifuel stoves can run on kerosene, and the US military’s JP8 fuel is 97% kerosene. JP8 is now the standard fuel for tactical vehicles and even generators, so you should be able to stay supplied easily enough. Some multifuel stoves will even burn diesel in a pinch, although they’ll need to be cleaned more often. The MSR XGK has a reputation for burning pretty much any fuel; it also packs up small and weighs less than a pound.

Military rations don’t deserve a lot of the abuse we heap on them – even MREs contain a lot of decent meals – but if you’re eating them cold for a week they get old pretty quickly. A good quality stove that you can keep fueled will make it all a lot more edible, give you some extra heat in cold weather and boost your morale. After a wet week on the training area it, along with your sleeping bag and poncho, will be one of your three best friends for life.