Home / Military Life / Can the Russians Build a Super Carrier, and More Importantly, Why Would They?

Can the Russians Build a Super Carrier, and More Importantly, Why Would They?

At the end of the Cold War, the Soviets sold or discarded all but one of its aircraft carriers. The four ships of the Kiev-class were either sold or scrapped (two were sold to China, one to India and one was scrapped in 1997), one of the two ships of the Admiral Kuznetsov-class was sold to China and one continues to operate with the Russian Navy.

The Kiev-class ships were hybrid cruiser-carriers that carried a small air wing in addition to missiles and weapons, primarily designed for ASW (anti-submarine warfare) work. The Kuznetsov-class was a more traditional carrier, albeit smaller than American supercarriers. A larger carrier was planned, and the keel laid down on the Black Sea, but with the breakup of the Soviet empire, the shipyard and the incomplete carrier ended up as part of Ukraine. Construction never resumed on the ship and it was broken up in the yard. 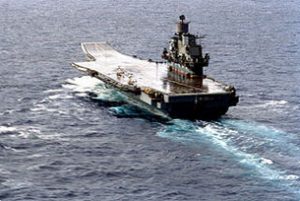 Recently, Russia negotiated with the French to have two Mistral-class helicopter carriers. Russian adventurism in Ukraine has put that deal on hold and it is not clear if it will ever be resumed. This leaves Russia with exactly one aircraft carrier, which never leaves port without a tug in case it breaks down, and almost every rival it has owning more or at least the capability for building them.

In many ways, aircraft carriers are the torchbearers of national prestige, similar in purpose – although not in use – to the dreadnoughts of a century ago. And, like every nation with aspirations of being a 20th-century superpower, Russia is feeling the loss of prestige at home and abroad. Countries as small as South Korea and Japan have built helicopter carriers while Russia relies on a 25-year old piece of junk that no one trusts to sail anywhere without a tug to pull it back to port. The one shipyard that could construct aircraft carriers for the Soviets is now in Ukraine.

Russia wants to build an aircraft carrier, as the Commander-in-Chief of the Russian Navy said so: “The Navy will have an aircraft carrier. The research companies are working on it, and strictly in compliance with the requirements from the Chief Commander.” The plans the Russians are drawing up are as impressive as they are impractical. The Krylov State Research Center in St. Petersburg has unveiled plans for the world’s largest aircraft carrier. Able to carry more planes than the Nimitz-class or Ford-class carriers, the initial designs have been met with skepticism; not just because of the size and complexity of the ship, but because the Russians are currently able to keep 125 of their 270 strong navy functioning. According to Dr. Dmitry Gorenburg of the Davis Center at Harvard University, only about 45 of those are in shape to deploy.

But, just like at the beginning of the 20th century, there are countries that cannot see prestige without naval power to back it up. Nations like Argentina, Brazil and Chile commissioned dreadnoughts to enhance their prestige even while disrupting their national budgets.

It is entirely possible that Russia would do that.