Breaking Down the Features on Russia’s New Armata Tank

I’ve been studying and talking about, Russian tanks for years. I can identify every model from the original T-34 onward and have an in-depth knowledge of their capabilities, strengths, and flaws. I’ve spent hours learning the upgrades available for them, how widely they’ve proliferated and what they mean for a NATO unit going up against them. From Chinese T-54 knockoffs to the latest version of the T-90A, I know them all. For the last 35 years there’s been a thread of continuity running through Russian tank design because that’s how long it’s been since an entirely new model – the T-80 – was introduced. Even the T-90 is a rebranding exercise; it was originally called the T-72BU and it’s a major upgrade of the T-72B(M), not a new tank.

It’s all changed now, though. The recent Red Square parade to mark the end of WWII in Europe was the largest ever held and featured a huge assortment of military hardware, but the star of the show was the new T-14 Armata. The flagship of a fighting vehicle lineup designed to replace the aging Soviet-era arsenal over the next two decades, this is going to be the worst-case opponent for western ground forces from about 2020 on. It’s still in the pre-deployment trials stage right now and only a handful have been built but the basic shape of the design is clear, and five years from now the first battalions should be collecting their shiny new tank fleets. So what will they be getting?

The first thing about the T-14 is that it’s a clean slate design. Soviet designs were very much incremental, following the basic design principles of the previous model or even incorporating huge chunks of its technology. This new beast is different. It’s much larger than previous Russian designs, although still not as large as western rivals. There’s a lot of speculation about what it weighs, too, with estimates ranging from 48 to 60 tons. Personally, I suspect it’s towards the lower end of that bracket.

What’s immediately obvious about the T-14 is that it’s a lot more lavishly fitted out than previous Russian tanks. There’s a remote weapon station on the turret, cleverly mounted on the same pedestal as the panoramic sight so one will never get in the way of the other. Four short-range radars are embedded in the corners of the turret and there are both smoke grenade and Active Protection System launchers on each side of the deck, under the turret’s forward overhang.

The turret itself is the most interesting feature. It’s fairly small and has a very angular, faceted shape. Publicity material from the manufacturer, Uralvagonzavod, suggests that this shape is a stealth feature to reduce the detection range of millimetric-band radars like the AH-64D’s Longbow system. What’s certain is that the external turret shell is either lightly armored or even just light sheet steel. The real turret is much smaller, unmanned and almost certainly very heavily armored indeed. It sits above an advanced autoloader located in what would have been the fighting compartment and it’s remotely controlled from the crew pod. 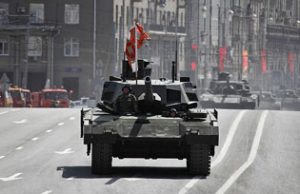 The most obvious feature of the turret is the gun. This is in the familiar 125mm smoothbore caliber but it isn’t the 2A46 weapon that, in one version or other, has armed every Russian tank since the T-64. Instead, it’s a new design, the 2A82-1M. This looks to have a more tapered tube than the older gun, suggesting the use of higher pressure ammunition, and it’s also lacking a fume extractor – with no crew in the turret there’s no need to protect them from toxic propellant gases. The gun is capable of firing the usual range of 125mm fin-stabilized ammunition including HE-FRAG, HEAT and long-rod APFSDS rounds, with the newer versions probably having similar performance to the US M829A3 or British CHARM 3. It can also use tube-launched guided missiles, possibly the existing AT-11 Sniper or, according to some reports, a new weapon with a range of up to five miles. Secondary armament consists of a 7.62mm PKT on the pan sight pedestal and a 12.7mm Kord, both of them remotely controlled.

The T-14 seems to have a multilayered defense system, with the outer ring being the Afganit Active Protection System. The Soviet Union was the first nation to develop an APS, first Drozd – withdrawn because its warheads were so dangerous to infantry – then Arena. Afganit seems to be a refinement of Drozd although it’s unknown if the problem of it shredding nearby troops has been solved. The system is fully automated and consists of four small radars around the turret, a fire control computer and an array of five launch tubes under each side of the turret front. When an incoming threat is detected, the system traverses the turret to bring a launcher online and then fires a rocket horizontally at the threat. The rocket warhead functions at a preset distance from the tank, hopefully destroying the incoming weapon. Where Afganit is different from previous Russian systems is that it’s apparently effective against APFSDS rounds as well as RPGs and guided weapons. APFSDS darts have too much energy to stop them easily but a deflection of 7° is usually enough to make it shatter against the armor rather than penetrating. Alternatively, it’s believed the system can fire a smokescreen from the T-14’s generous array of grenade dischargers, and possibly lay the main gun on the threat’s origin point.

If a threat gets past Afganit the next layer is the Explosive Reactive Armor; in this case, it’s thought to be Relikt, which the makers claim is twice as effective as the already formidable Kontakt-5. Relikt is unusual in that it functions before the round actually hits it, again triggered by short-range radar. That obviously has emissions implications and my guess is that of the radars switched off it will function on impact, but be somewhat less effective. Firing before impact would let it disrupt a HEAT jet, or guillotine the nose of APFSDS, further away from the base armor; that means the penetrator will be more degraded by the time it hits the tank.

This is where it gets more mysterious. I suspect that the hull is a lot less heavily armored than previous Soviet – and current western – tanks. I’d expect it to have all-round resistance to 30mm AP and possibly smaller HEAT rounds, but not to stand up to a main gun round or ATGM. The hull armor isn’t the crew’s last line of defense though. The T-14’s three occupants sit in a heavily armored pod inside the front of the hull – driver on the left, the commander on the right and gunner in the middle. There are two hatches, one each side, and a generous array of periscopes for all three of them. There are also video cameras giving all-round coverage, a lesson learned from urban combat in Chechnya. The point about putting the crew in a pod, completely isolated from both ammunition storage and the engine, is that with such a small armored volume to protect it can be very, very strong. I would expect this pod to give excellent protection all rounds with frontal armor far in excess of even a Challenger 2. It’s likely that the gun, autoloader, and ammunition magazine are similarly tough, with the rest of the tank protected only well enough to prevent infantry weapons or fragmentation from causing a mission kill. This armor layout, while unconventional, would keep the weight down to something near the 48 tons the makers claim. 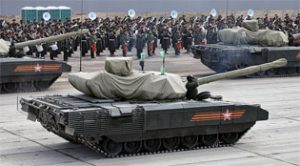 In terms of sensors, the T-14 looks to be well equipped. As well as the video cameras the panoramic sight has thermal and daylight channels, and there are rumors of an electro-optical periscope retracting into the turret that will let the crew observe from a turret-down position. One thing that’s been rumored, but was missing from the tanks on display in Red Square, is a long-range AESA radar supposedly based on the one fitted to the new PAK-FA stealth fighter. There’s a large square recess on the turret front that would probably hold that quite nicely.

In terms of mobility, the T-14 has a traditional torsion bar suspension and seven road wheels per side. Drive sprockets are at the rear and are powered by a Chelyabinsk 12H360 diesel rated at 1,500hp, although this is supposedly governed to 1,200hp in normal use. This is a big leap for Russian tank engines and, combined with the low weight, should give the Armata excellent acceleration – a key decider of tank survivability in combat – and tactical mobility. The step back from fuel-hungry turbines, as fitted to the T-80, suggests good operational mobility as well. Estimated top speed is somewhere between 50 and 56mph.

So what does all this mean? Based on what’s known, the Russians have started with a clean sheet of paper and a list of operational lessons from their recent wars; the result seems to be a design that’s a generation ahead of anything else in the world. Obviously, it’s not yet a fully operational design; only four examples have been seen and they’re trials models, so the service vehicles are likely to have a lot of changes in sensors, system layout and possibly even secondary armament. It’s also possible that the technology is a bit too bleeding edge. Russia has done that before; the T-64 was intended as a high-end design for tank divisions while the cheaper, more traditional T-72 went to motor rifle formations. However, the T-64 had a lot of issues with its more advanced systems and by the time they’d been sorted it the T-80 (another high-end design) was close to being ready. In the end, of course, the supposedly low-end T-72 proved to have more development potential than either. Anyway, there’s always a risk of the T-14 turning out to be too advanced to be soldier-proof, or of major systems not performing as well as expected.

If it works at something close to its design specs, however, this tank would make for a formidable adversary. It’s a lot more survivable than anything Russia has ever fielded before and its lethality should be on a par with current western designs. It also seems to have at least a near-peer sensor capability and with the addition of an AESA radar would gain a formidable ground and air surveillance capability. It’s not due to reach units for another five years, and it’s not an invincible superweapon, but this does look like it could take back the technical edge Russia last held when the T-72 entered service.