The Army regulations are about to get some pretty big changes thanks to input from Project Inclusion, the Army’s new initiative to improve diversity, equity, and inclusion across the force. The AR670-1 Updates for Hair and Grooming are working to form a more inclusive Army unit. You won’t be seeing any crazy colors or a free-for-all when it comes to grooming standards, but the updates do take a step towards making sure the uniform regulations work for everyone.

The Army has always had a very strict set of grooming standards that were designed to reinforce uniformity. But the Army looks very different than it did when many of those standards were developed and, until recently, the AR 670-1 standards hadn’t considered the needs of women—particularly African American women.

Army hair regulations used to require women to pull their hair back into a tight bun, which is a hairstyle that’s works well for Caucasian women, but not so great for Black women. In the past, a Black female soldier may have had to get her hair chemically straightened in order to comply with uniform standards. Or, she may have suffered from a hair loss condition called alopecia after pulling her hair back in a tight bun for years.

Recognizing that there was an unnecessary burden put on women, Project Inclusion put together a new set of hair standards that were recently accepted into AR 670-1. Now women can wear:

Women can also color their hair if the color presents as natural (think more brown, blonde, or black instead of purple, green, or orange) and the roots don’t exceed 1.5 inches of the original color. The updates also eliminated the minimum hair length for female soldiers, but they can’t wear their hair in a way that interferes with their headgear or other protective gear.

One of the goals of the updates was to give women room to feel like a woman, both in and out of uniform. That’s why the recommendations paid special attention to typical feminine grooming standards, like nail polish, earrings and lipstick.

Women are now allowed to wear both lipstick and nail polish in natural colors. They’re still not allowed to create any designs on their nails or cut them into extreme shapes like the coffin, ballerina, or stiletto. This was the earlier standard, but it was revoked in 2014.

Men can also wear clear nail polish to help protect their nails from harsh chemicals they may be using on the job.

Women can now wear earrings while in ACUs if they’re in the Garrison. Earrings still aren’t allowed in tactical or field environments for safety reasons. The earrings must be gold, silver, or diamond. As with most things in the Army, these guidelines are subject to the discretion of the commander.

The updates also recognized that the U.S. Army is a long-term career for many women. They go through many big life events as a soldier, including giving birth. AR 670-1 already had standards for maternity uniforms; now it recognizes nursing mothers have different uniform needs and allows them to wear an undershirt with their uniform, which will help them be more comfortable. 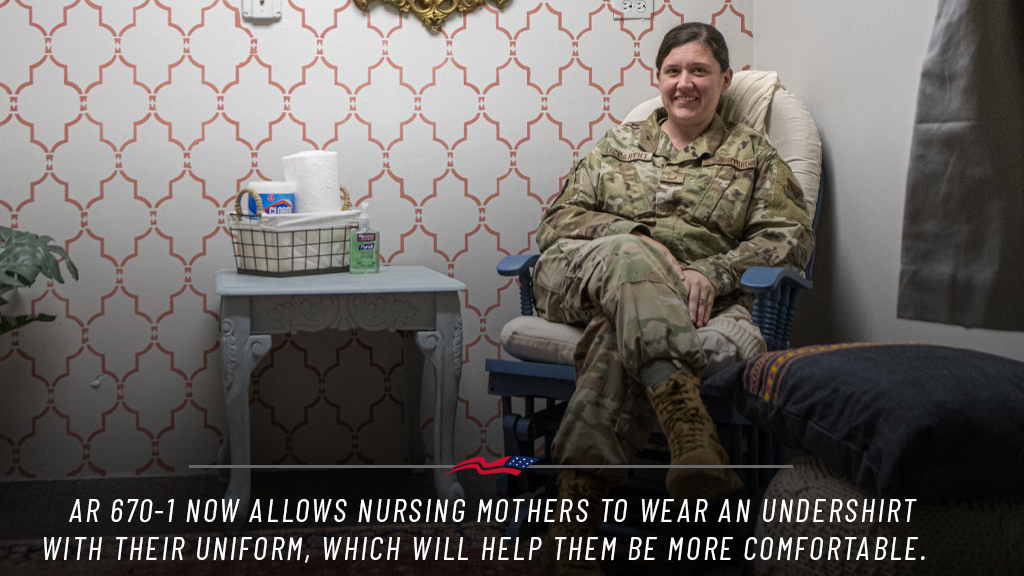 These updates seem small, but they’ll go a long way in making the Army a more inclusive place for all soldiers.

Trending – Seven Colors to Three  The U.S. Army’s OCP Combat Uniform insignia, badges, and tapes will now feature a lightened 3-tone pattern to increase the legibility of the uniform identifiers.