Home / Law Enforcement / All That Gear: Alleviating Back Pain

All That Gear: Alleviating Back Pain

When I was a kid, I was fascinated with my dad’s duty belt. There was a holster for his revolver, a pouch for his speed loaders, handcuffs and a ring to hold his nightstick or flashlight. For years he patrolled with little more, and I often wonder what he would think if he were to see what that same duty belt might look like today. 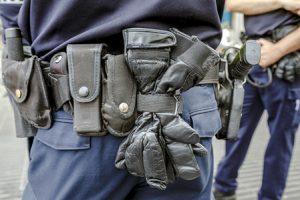 The modern patrol officer carries more of a Bat Belt than a duty belt. There is a duty weapon, usually a large frame semi-auto and multiple spare magazines with close to 45 rounds, multiple pairs of handcuffs, an expandable baton, Taser, radio and OC spray. For the average officer, the amount of gear they carry on their belt is limited not by need or desire but by space. This leads to many departments issuing external tactical vests to carry additional ammunition, first aid kits, distraction devices, cellular phones and a whole host of items once banished to a bag in the passenger seat or the trunk. But there is a price to be paid for carrying everything but the kitchen sink, and for many patrol officers, this price is back pain.

Medical professionals agree that a major cause of back pain is weight gain, with many claiming as little as a 10% change in body weight can result in damage to the discs, muscles, ligaments, and tendons of the lower back. Guess what that modern duty belt weighs? On average your daily equipment load weighs in excess of 20 pounds, meaning any officer weighing 200lbs or less is automatically at risk. If you take into account aspects of daily patrol duties such as long-term sitting in a patrol car or standing posts, which are in themselves injury-inducing behavior, the risk multiples.  Following my own brush with back problems, magnified following a fall, my physical therapist provided me with some valuable advice that allowed me to get back on my feet and back to work.

No, you cannot ditch your duty gear and tell the sergeant that your doctor told you to. However, if you are carrying any additional weight around your mid-section, it is in addition to the 20 pounds of gear you must carry.

When I hobbled into my first PT session I saw balance balls, restriction bands and other patients planking. My first thought was the next couple of weeks were going to be wasted a few hours at a time. But my therapist explained that although we would be conducting strength training, it would not be designed to increase my lifting ability or make me run faster. This training would be core training designed to strengthen by abdominal area which would, in turn, redirect the strain away from my back.

Most patrol equipment is placed for ease of access; however, you should also take into account the strain that equipment placement causes. You can also redirect the weight by wearing suspenders which takes the weight off your hips, or padded belts which reduce the pressure placed on your lower back.

Every profession has inherent risks and law enforcement is no different. But that does not mean that those risks are not manageable or that your need to accept them as unavoidable. Not only will reducing back pain allow for a better, pain-free career but also allow for an increase in your overall health and well-being.