A New Constellation: The History of America’s First National Flag

On June 14, 1777 the Continental Congress passed the Flag Act. The act, known as the Flag Resolution, was meant to create a unified symbol and represent the American colonies. The red and white stripes symbolized the 13 colonies and the 13 stars represented the colonies that replaced the ones previously governed by Great Britain. This act would later be celebrated as Flag Day. And while this may seem like an innocuous endeavor, the American Flag has a bit of a storied past.

The Need for a Unified Symbol

While the stars and stripes elements were documented, the actual design of the flag – primarily the layout of the stars – was left undefined. In fact, the final decision was left to the manufacturer. This left multiple variations and some uncertainty as to whom should be credited with the first design. According to some, George Washington may have asked Betsy Ross, a seamstress, to design a flag in 1776 after laying siege to British-occupied Boston. This design featured the 13 stars in a circle. 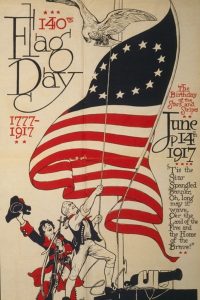 Chairman of the Continental Navy Board’s Middle Development, Francis Hopkinson, is also credited with the first design. Hopkinson, who is also a signee on the Declaration of Independence, is said to have designed the American flag as well as the U.S. Navy flag. While Ross’ claim has been passed via word-of-mouth, there are records of bills from Hopkinson to Congress in Congressional archives. His design featured six-pointed stars arranged in five rows.

The Evolution of the Flag

It would be some time until the American flag would reach a conclusive design. In 1779, George Washington made an appeal, once again, to Richard Peters for an official design. While the red and white stripes would remain standard, the layout of the stars would shift from alternating rows to an actual star. Peters would ultimately draft a resolution, but no action would be taken.

The next major change was in 1795, when the number of stars and stripes increased to account for the addition of Vermont and Kentucky. It was this version of the flag that inspired Francis Scott Key’s “The Star Spangled Banner.” Finally, in 1912 President William Howard Taft officially established the design of the flag through Executive Order. This Order established the exact proportions of the flag, the six horizontal rows of eight stars and that each star be pointed upward.

To celebrate the Flag Resolution, President Woodrow Wilson established June 14 as Flag Day. And, while it isn’t a federal holiday, parades are held across the country in celebration for what the flag stands for—courage, sacrifice, vigilance and justice.