A Look at the FG42 Battle Rifle

A couple of weeks ago I wrote about the first assault rifle, the Sturmgewehr 44. Today I thought I’d look at a less well-known design that’s arguably the first modern battle rifle – the Fallschirmjägergewehr (Paratrooper rifle) 42. I know, I know – the M1 Garand, SVT 40 and Gewehr 41 were all in service before it, and they can all be classed as battle rifles, but the FG42 was a big step forward. The earlier weapons were basically the same as the bolt-action rifles they replaced but with a semiauto action. The Garand, for example, had a fixed eight-round magazine – a smaller capacity than the Lee-Enfield – and followed a very traditional layout. Meanwhile, the FG42 offered selective fire, a high capacity box magazine and a more compact, ergonomically efficient design. In performance and functionality, it’s much closer to an FN FAL, M14 or G3 than to anything that came before it.

Up until 1942, German paratroopers used the same weapons as the German Army – most of them were armed with the Mauser Kar98k rifle, while NCOs usually carried the MP40 submachine gun and the support weapon was the MG34 GPMG. These were all capable enough weapons, but thanks to the antiquated design of the standard German parachute harness, they couldn’t be carried during the actual jump. Paratroopers carried a handgun for self-defense, while their personal weapons were dropped in containers and collected after the jump. That was never ideal, and during the invasion of Crete in 1941, it became a lethal liability. Many of the 15,000 paratroopers who jumped onto Crete landed under the guns of British defensive positions, and hundreds of them were cut down by rifle and machine-gun fire as they struggled to reach their weapon containers and arm themselves.

After the battle, the Air Force, which was responsible for German paratroopers, started urgently working on a new parachute design – but it also asked for a new weapon. The design requirements were ambitious. They wanted something that was no larger or heavier than the Kar98k, could be fired accurately from the shoulder as a rifle, but was also selective fire and capable of acting as a squad automatic weapon. It had to be chambered for the full-power 7.92x57mm Mauser round, not the new 7.92x33mm Kurz, and it had to feed from a detachable magazine. 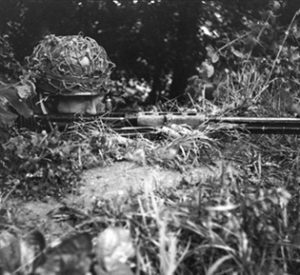 Six companies were asked to submit designs, but most of them took one look at the impossible specifications and didn’t even bother. Mauser came up with a massively complex, overweight belt-fed weapon based on the MG81 aircraft machine gun, which was quickly rejected. That only left a design by Louis Stange at Rheinmetall. It seems Stange didn’t know that the specification was impossible, because he’d just gone ahead and designed a gun that met it.

After a series of minor revisions, Stange’s weapon went into production in early 1943. A major upgrade in 1944 replaced the complex forged receiver with a cheaper but equally effective stamped one, improved the pistol grip angle and moved the mid-mounted bipod to the muzzle.

Stange’s design was nothing short of remarkable. He created a gas-operated weapon using a lightened version of the Lewis machine gun action, which fired from a closed bolt in semiauto and an open bolt in automatic. To reduce the overall length, the magazine well was on the left of the receiver with the pistol grip directly below it. The side-mounted magazine was the weapon’s only real weakness – the weight of the steel box and twenty full-bore rounds unbalanced it slightly – but the result was a rifle half a pound lighter and six inches shorter than the Garand, with more than double the magazine capacity and an integrated bipod and flip-out spike bayonet. Incredibly, it was only an inch longer than the StG44 assault rifle and several ounces lighter, despite firing a full-power round. The straight-line stock and effective muzzle brake meant the automatic fire was reasonably controllable and fired from the bipod it made an effective SAW.

Some features of the FG42 were remarkably modern. It came with a rail for a ZF 4 telescopic sight but was also fitted with flip-up iron sights almost identical to the ones you’d fit on your flat-top AR15. The bipod and optical sight let soldiers exploit the power of its heavy round at long range, making it a respectable designated marksman’s rifle. It could launch rifle grenades straight off the muzzle brake without any special attachments. The action was so robust that the USA later modified it as the basis for the M60 machine gun.

Unlike the StG44, the FG42’s military career basically ended with the collapse of Nazi Germany. Despite this, some shooters say it’s a match for many far more modern rifles, and there’s no doubt it’s one of the most striking and innovative Second World War firearms. Not many originals have survived and their rarity, combined with their NFA status, makes them very expensive in the USA. However, SMG Guns of Decatur, Texas is now making a very close semiauto replica in either 7.92mm or .308, so it’s now possible to own one for a reasonable price. If you do, you’ll get a weapon that isn’t just historically interesting, but also an extremely effective battle rifle even by today’s standards.